The free market is about more than money. The liberal lie!

On a side note, I was completely blocked from answering someone on youtube because I was arguing, quite successfully in all likelihood, with a liberal: 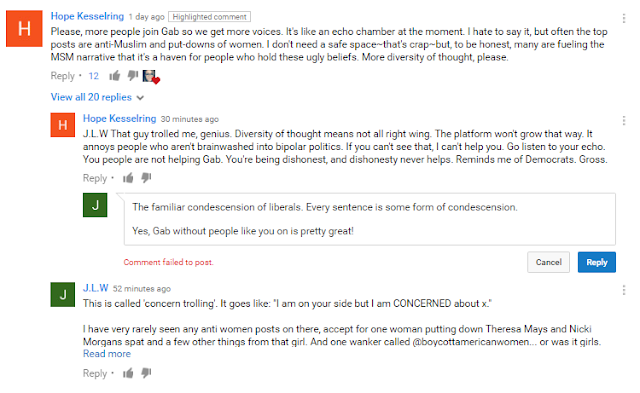 Quite amazing, I am still 'failing to post', seemingly words can hurt, and it seems unlikely this is automated; it is more likely that a youtube moderator saw my post and personally decided to get involved, or perhaps an SJW complained about my post... If these groups need to censor that badly then they have surely lost all argument. That is a truly paranoid level of sensitivity.

However, I was trying to find this:

Out of every single seasonal episodic individual piece I have ever watched I think this is the most powerful. Nothing comes up to this standard from either the 4400, Stargate series, Star Trek Series, Star Wars Animated series, Jessica Jones, Angel of Buffy. Although there were powerful romantic parts in the lattermost two supernatural series, what makes this more powerful is that this feels real. There are no demons (people in funny suits and make up) that are going to come back to life. Things that happen in this part here are real.

But, the studio decided to categorically destroy this scene by changing the context as to what happened after and it is clear they did so for more money. Rather like Jessica Jones, where there was no hint of the progressive agenda in the first few episodes but once the viewer/ critic is hooked, they will watch until the end despite that. In this film, the producers lost nothing (by most estimations) by changing the context of this story arc to artificially make it longer and destroy, what is in my view, one of the best scenes in TV history because of this. The did gain money potentially though.

Quote: Everyone I've talked to agrees Annabel was an awful movie, as of right now the film has a gross of $231 million on a budget of just $6.5 million. (Many other examples).

But here I want to make a central point about the free market, or the Uranian themes that I might not always have made obvious. The free market is more than just 'money decides the rules' and more than just 'competition, if someone provides a bad service customers go somewhere else.'

Adam Smith was a theologian and when he talked about an invisible hand he was talking about a force more intelligent and powerful than any of us moving things in a positive direction. He was not simplifiying this to set laws that would determine these things.

From an overly simplistic understanding of the free market that includes competition and not much else, we might decide that the corporates have us 'checked' here. The customers decide what they want to watch after all, the studio executives abuse of the process is not going to be punished because the customers reward this.

However, let us take a larger view. Firstly, this speaks within a small genre, however this is a minor point. The real way that this sort of circular stupidity would be overthrown is through the widespread increase in positivity of the human condition... The reasons people are going to see this sort of movie are linked to other parts of their lives:

A) The better horror movies are not largely available because the smarter, less controlled writers are held down.
B) The moviegoing audience is not sophisticated partly because they are mostly struggling to survive and keep up with other relationship concerns that take their time away from being able to consider these things.
C) Increases in health in other areas of their lives may increase their perceptions and appreciation of these things and allow them to intuitively stay away from the films they know are bad.

It is like... A tired person will watch a crap film, and pay for a crap film, because they don't have the energy to look for something else.

A world where art is more authentic will be very good! Where the mentalist Red John arc ended in Season 3! Where the 4400 Season 4 was not completely destroyed! Where good actors who resonate with authentic characters and no money men involvement are attracted to the industry!

The end of the lie?

Today is a day I suspect many have been waiting for. The Electoral College.

I have no idea what we will actually be told today. Zerohedge passed on an article 'The Electoral College, what to look for?' But... as far as I know we are not told the vote until January 6th!

This video from Steve Pieczenik was a good listen. He basically says that the Hillary/ Soros/ Democrats/ Establishment etc. have no more cards. They cannot suppress things based on fake news ideas, they cannot rig the vote, they cannot do anything!

They are bluffing! It strikes me that they are relying most on the boldfaced lie than they ever have, and while they have been cointinuing the lie, their resources have been shot out from under them. Their lies have been exposed. Their tools, like the mainstream media have been destroyed! This reflects in government and reflects into all areas of our lives as a holographic thing!:

A) The stock market is rallying despite some of the very worse fundamentals we've seen for a long time. Treasury's are being dumped,  yuan is devalued, interest rates have increased, bonds have sold off. Stocks are at all new highs all the time! Something is clearly not right here!
B) The mainstream media has lost all credibility. Sales are awful but they are continuing to stubbornly push out their propaganda despite the fact the public is literally 'not buying it'!
C) Da'esh have lost in the middle east. Nothing the American have been doing has stopped this.

There are loads of minor points coming from all these things but you probably already know what these are!

I believe this is reflecting on some domestic level down where we are. So some long term liars are feeling more transparent than normal!

I was reading today a very financial piece and it was very boring! It was about how a big company is doing. That sort of sales talk is very unnatural and it all lacks a central HEART. To consider some more genuine small companies... Infowars, alternative health stores etc. Normally when you hear people talking about things such as sales and circulation it is with passion. It is tied to a central principle. It clearly is not with these big corporates.

Just one of the things I suspect will change in the near future.
Posted by No name here. at 02:26