Marxist agenda has taken over all entertainment.

My write up of Jessica Jones, in particular the idea that all the white male characters are villains, is strongly reflected in the new Star Wars... That has mainly been reviewed by users to be awful, and which the good reviews tend to be a little up themselves and use the word 'I' too many times during said review.

Although I did enjoy Jessica Jones and got some good thoughts from it, but I'm not about to watch the spin off series 'Luke Cage' because of this agenda, the clear identity politics in a series made by the same creative team will be very grating. The Star Wars Rogue One reviews also include the fact that this is ANOTHER female lead, and point out problems with this. 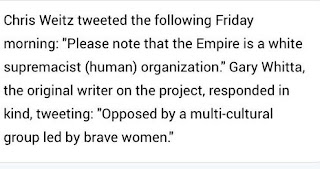 Watched two horror movies on Netflix and did enjoy the first one a little but horror isn't really my thing. The thing that is missing from the Jessica Jones story is the idea the negativity... 'Evil' is multi layered. the antagonist in Jessica Jones was a singular evil character surrounded by people that were just normal. There were no layers to his existence or willing accomplices.

This whole idea is quite silly of course. Firstly, that a highly powered media presenter personality could get away with doing anything and not be stamped down upon by negative powers is laughable. What about the company that made Kilgrave the man he was? There have in the past been realistic layers to these things in films. Secondly, Kilgrave ignored one of the fundamental realities of negatively orientated people... A law that always happens with them... They make enemies. The enemies they make are powerful which is why specific negatively orientated individuals never lasts in the long term.

So Kilgrave spent his childhood doing activities that would likely include him killing people every so often, and putting people through miserable pain most of the time. How many would he have killed? How much suffering caused? Why has he not made any enemies of those who have escaped his grasp? Ex policeman with sniper rifles? Interested intelligence agencies who could send a drone after him? Any number of individuals!

If people have to get creative to take down someone difficult to oppose, they will do.

I have been forced out of Netflix like series, either because I don't want to watch them or I find their agendas nauseating. I have not been one for movies much, never really enjoyed them. Most series have these same problems, even though I really enjoyed the Star Wars animated series, there are none others that seem interesting.

The Marxist agenda has taken over entertainment, completely and utterly. I have been forced out of these things.
Posted by No name here. at 21:01