If my information is right, and it is not always right in political matters (dates and times are not always reliable for political events I find) we should get the results of the French election in less than six hours.

I am very much looking forward to them, regardless of the result. Simply so we can move onto the next thing and there is no more waiting. I've seen plenty of evidence of voting 'irregularities' in Macrons favour such as two Emmanual ballots going out instead of one for Emmanual and one for Le Pen.

Personally though, I feel pretty fantastic! I put on a small bit of weight, only a very small bit. Immediately I stopped all the sugary drinks and cakes that I had lazily been buying (although I do have to have some for my diabetes). This morning, along with going back on meats of all kinds and going on non sugary foods most of the time I had half a chicken and I feel FANTASTIC!

The "ethical" problem is that it might not be financially sound for me to continue buying free range, that that chicken was. Meat in general is very expensive. I was getting by before on Tuna fish that was 75p - £1 per day. Most meat though is far more expensive than that.

At least though the standards are a lot better than they are for America! That is thanks to the soon to be defunct European Union! 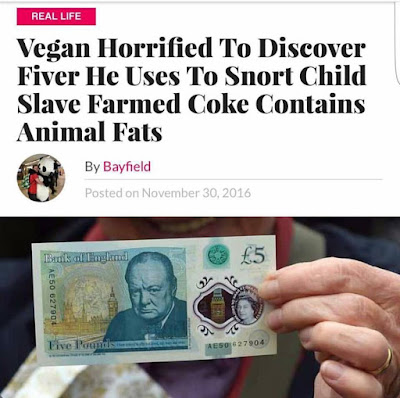 I remember when I originally went onto the diet I went on for about two years. I was re- evaluating a lot of things and I felt sick from eating bacon. I fell into this long argument with a group of vegans. After talking to one I respected I highlighted a post that was a woman explaining how undesireable non vegan men are, and the comment section was full of hatred towards non vegans. I ended up getting in a massive row with these people which ended when I had a dream where there was a woman in a dojo, like a judo dojo or tournament, and I wanted to both rape her and eat her... A far more angry dream than normal, and explained the dream on the comments section on facebook and changed that part of my life.

Looking back on that now though it is likely that all those vegans together getting angry at me could have caused that dream. I was arguing against them and no losing. So they were faced with either losing polarity or forcing me to depolarise. It seems I depolarised, since I did try at the time to do proper research, but the research that I have since found was not available to me at that time for whatever reason.

Interestingly, that dojo and the woman have two relations to the current moment. One is that I have been doing more martial arts in the past month or so (I have about three weeks between lessons I strain myself so bad). The second is this article, where 'wrestling' was a big part of the case.

I do think that meat does lightly in some manner effect the sex drive or feelings in general. I feel a light pleasant sexuality at the moment. I feel far less stressed as though a major stressor has just left.

Recently Stefan Molyneux and a guest were talking about how women talk about politics on a first date and men have to stay quiet about their political opinions. Also, as a joke these two fairly manly men went along the lines of: "You have a good rack but you worship Satan, well maybe that deserves another look" and something similar on Hitler.

Of course, Stefan Molyneux is a very proud atheist and Satan is actually just a metaphor to him. To me though it is more than that which is why that statement probably gave me more disgust (Either he has edited that video now or I am lousy at searching videos because I could not find it, in the current political climate jokes on Hitler do not go down too well!) Since I do believe, as is actually fairly directly stated that people close to Hillary are sacrificing babies to evil spirits, and torturing and killing young children etcetera.

But regardless of that, I can still view it as a metaphor, after all, when you are reading a book with the concept... Faust for example; is the idea other than a metaphor then?

But I wondered what people in general thought of that, I do not agree: 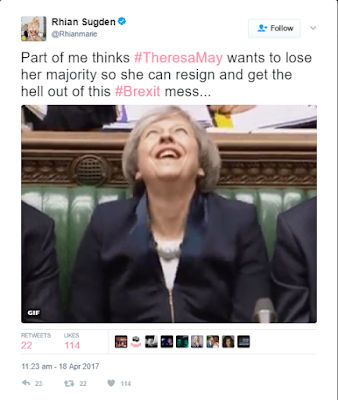 Does this mean the EU is now worth another look?

For the record, this one is a nice balancer just to feel better: 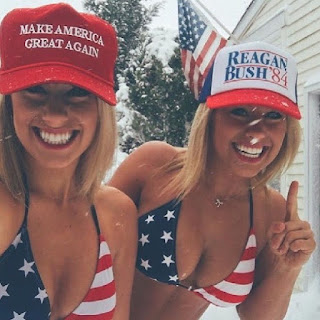 I do not think the EU is worth another look, even though this is Rhian Sugden: 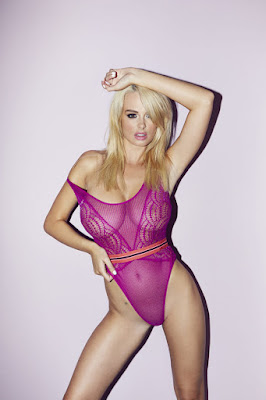 Secondly, I wonder if that kind of attitude would even help a guys chances with girls. Women of course like the non logical lust. Sometimes. But also I don't think want to be in a position where what they say does not influence a situation in either direction. When I have dressed in a certain way (sometimes never to wear said t- shirt again) I have not liked the attention of the kind of girl that likes a very hard guy. For them I imagine it is similar that they do not want attention from someone that fundamentally does not care what they have to say.

Yet I digress, I feel I have borrowed a feminists microphone *wipes self... yuk*.

The Le Pen election is soon. I imagine it will be a time we look back on as one of the big events of history if Le Pen gets in! Which I think she will. Talking about those psychic tendencies going along with the dream I said earlier, I think (also intuit) that liberals have convinced themselves that Macron is going to win. They know the opinion polls have been wrong before and yet, because they want to and because it is how they think, to trust authority, they are going to trust the opinion polls! ... and tomorrow is going to be very interesting! 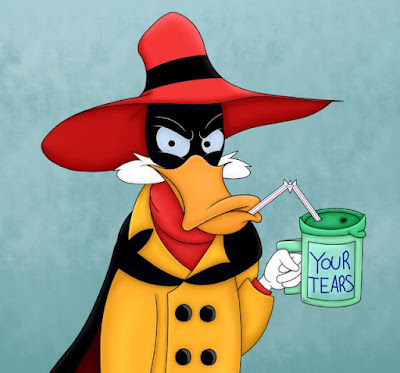 I recently talked to a liberal remainer on twitter. The guy annoyed me so much because we were having a political discussion and he would not engage. It seemed as though we were having a civilised intellectual discussion about the EU and the UK General election but when I mentioned the obvious point that if Le Pen gets in then the Brexit negotiations will be greatly aided and strongly pushed towards proper Brexit he did not engage. He could only say things like... If the second round is Le Pen and Macron Le Pen will not win...

That was not what we were talking about! I said to him 'if' Le Pen wins it means x and 'if' Macron wins it will mean y. That is a discussion. 'This is what I would prefer to happen so is what I will imagine, and shut down all alternatives' is not a discussion. The guy deleted those tweets when I went back to them yesterday.

I find it interesting, that just as a big event is happening, just as a candidate is likely to win who will move anti globalist pro justice ideas forward. Just as a candidate is about to win that femen protesters are aggressively protesting. The Red Pill has been released. It is number one in at least Canada and possibly other countries! It is an anti feminist documentary. Another thing the feminists have been protesting.

Now, I do not think that is a coincidence!