Different thoughts on the future. (Updated 9:16)

My last post did not get so many views, but it is one of my more important, an idea I will take to heart and probably be building on at some point.

So, I am, on a purely emotional level getting rather down. The absolute farce of politics when vote rigging goes on so unchallenged is disheartening and, after Holland, I'm not willing to express any enthusiasm about the result of the Sunday election.

I saw this great response on David Wilcocks latest blog post. I notice that since this part of the post is unmoderated so it is more interesting. The moderators have allowed a lot of anti Trump stuff through, to the extent it has been a whinge closet, but did not allow my post through challenging that (the moderators that is!)... Of course it is difficult to know but my sense is that when I go on there see an anti Trump post and don't challenge it because why bother if you are censored? That is the result they want. I suspect they hold mildly left wing views. 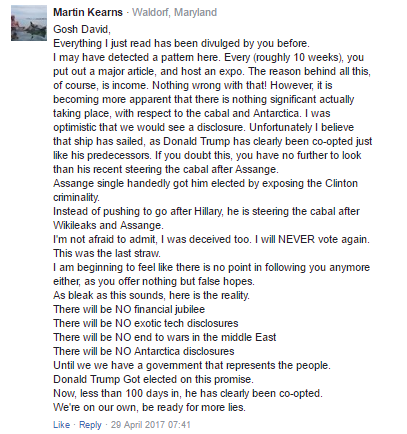 Now I am not sure he is technically right here, it is not EVERYTHING that was written on the post had been divulged before by my memory, but the actual information divulged was not a great update to anything, unlike some of them, is debatable in its impact, as though it could have been part of an article rather than the whole thing. The information Davids audience is interested in is when will something in practical, material terms change, such as mass arrests happen; and David cannot provide that.

I DO still believe in politics but I have also been feeling this difficulty holding the faith.

If things did change how would they look? What David says about there being a massive ascension event as also told by the Law of One I find likely, but it would be a little dissatisfying in my view to have the ultimate justice of these problems removed from our hands, and I'm not even talking about the global things such as miracle cures held back and paedophilia rings or monetary manipulations. The smaller everyday things are also important.

This is pretty fantastic, although the title is a bit drab!

The personal stories about the unfairness of the justice system and the unbelievable behaviour of many of the women is quite something. I'm spoilt for choice in considering recollection of one of them!

In America, of the men that have had paternity tests done on children they have thought are theirs, 50% were not theirs! In the UK a statistic that has always stuck with me is that 1/10 men are looking after children they believe are theirs but are not!

Quite the cruelty! Those children are not viewing themselves correctly. We carry genetic tendencies from our parents I have seen it abundantly ALL THE TIME. To lie to a child about such a thing is surely a crime on the deeper level.

How would society look if there was a consideration of this problem and a mandated mass test of all children to genetically determine paternity! Now that would be quite something. However, it is not something I instinctively feel is going to happen because women not being punished (the right word... Punished!) for their cruel behaviour that usually includes a massive refusal to take responsibility, women not being punished for these things is the normal thing in the way I have lived my whole life. (Clearly part of the solution I would like is men who are not the childs father being made to pay child support by the state!) 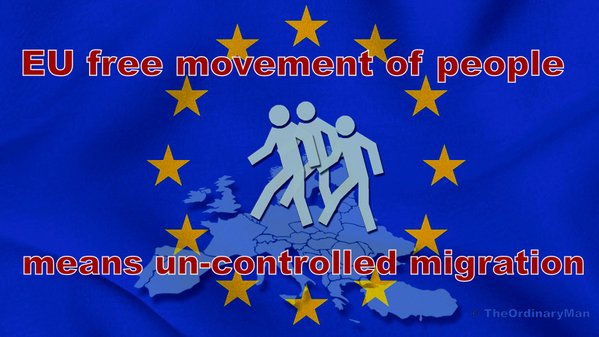 Another example of this is how the politicians in the UK and Brussels are so determined to stick with mass immigration. I don't even think that all the ones that are here already should necessarily be allowed to stay, especially if their home country has been severely 'brain drained'! I never used to think that but two things have changed my mind: A) Real experience with immigrants, especially those that are 'racist' towards English people. Even though this cannot really be determined and may sometimes be structural (i.e. easier to hire immigrants, will be treated very badly and not complain), I have seen enough general anti Britishness and not all of it abstract very deliberately a great deal of the time. (Just to state, not in my current role at all).

(UPDATE: This is almost a liberal fallacy I made here, (I have had no sleep and not been able to work) This is not true but it felt true as I wrote it. What IS true is that there were a lot of British people that were hired and fired in my last job, and this seemed to get at me on a psychological level moreso than other far more traumatic events for some strange reason. Curious how the mind works. But the truth is the person I was talking about here was too intense with everyone not just the British, although there was one incident involving race I was angry about, and another was the 'structural problem'.)

B) Another reason is the frustration against the lack of change and the liberal arrogance, wanting a real win against them, the punch that I feel psychologically needs to happen; and the understanding that in times of great change unexpected things like this, unexpected huge political changes that effect peoples entire lives, are common place. Something will eventually happens that sets big events off, this might be one of them. 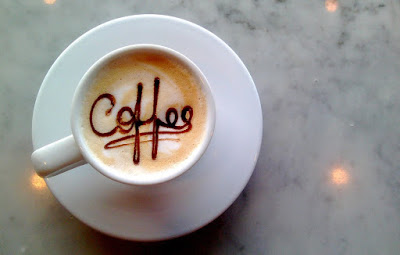 I have not eaten chocolate for a long time now and have previously gotten very bad results from caffeine. Since I was relaxing with a few different things such as meat, and because the Infowars supplement "Cave Man" is made with chocolate, I decided to try a dairy free bar.

That stuff, is POISON. I only realised when I went to the toilet today and the effect left me. It changes your thoughts and your sex drive. It is just wrong. I also wonder what the world will be like as we move away from noxious substances, such as psychic suppressants in the tap water etc.

Even though I am obviously sensitive to this substance, I do not believe the effect is specific to me. A book called 'Caffeine Blues' by Stephen Cherniske was one of those I read when I wanted to get off it and if there is a study that says caffeine stops the blood going to your brain for instance (which is why people get a headache when they stop!) that is a scientific study on everyone, that is not just me.

I have not slept well today, I will likely go into work, possibly do a few things afterward and enjoy a night where I will not have to get up for work the next day. Saturday will probably be a blur of not that much productivity and then we will be at Sunday.

The Gateway Pundit: Antifa Chick Goes to Turkey With Muslim Loverboy, Gets Raped and Beaten
Posted by No name here. at 23:39