It is now TWO days until Trump inauguration. He has said he wants to sign four of five executive orders on his first day in office, but no one yet knows what these will be... Exciting times!

As per the oestrogen packed soya realisation, I have stopped eating soya. But, there are a lot of things I don't eat now, and without that as well, without the occasional potential soya yoghurt and motivation to go and get a soya latte, there really is far less to eat, and almost nothing that doesn't have to be cooked.

I have, when my bloodsugars have gone down, gone back to eating gelatine. I don't think gelatine is a healthy or ethical thing to eat. It is all the worst parts of the animal, including hairs, all boiled and melted down. It is likely taken from animals that have suffered the most horrendous torture.

Also, it does not feel right once it is eaten, it sort of sticks to the inside of your oesophagus. Despite the fact that I came away from gelatine, I told myself for health reasons, I do see the ethical side, and when people on the alt right celebrate tormenting lefties by wearing fur, or say that gelatine is 'really nice', I don't want to take the side of the lefty. But I suppose its tough! (Alt right peeps like Barbara 4u2c are also vegans).

I'll have to figure out what to do about this. The solution is probably to eat small amounts of soya, or to go out and buy quality flapjacks. There will be some solution.

Coincidentally while having all these thoughts I also saw this film: 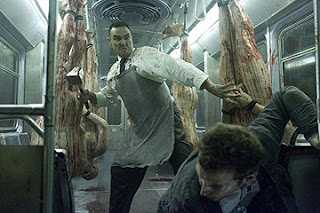 I have been looking for entertainment that the mentalist should have been but wasn't. I'm not usually so into serial killer films, but Patrick Jane taking on Red John in an intellectual way was fascinating. I don't think I've ever seen a hero that takes on the villain with his mind, rather than the mainstream version of a sort of one man cavalry.

Midnight Meat Train however, despite it's write up, was NOT that film. It is more reminiscent of Saw than Sherlock Holmes. It was however, quite a deliberate attempt to take the vegan message. The main character starts going downhill when he turns away from tofu and has a steak.

Another series called 'The Killing' seems like it might be, where the Killing of a young girl is mixed up with politics, might have this element of mystery and intrigue, but if it's as stupid as CSI brand of detective work then it won't be interesting. 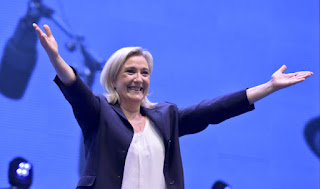 Two days still to come and then the excitement begins. I'm also very excited about Le Pen potentially getting in in the May election. Even with the rebellion against the establishment, no one really seems to actually do anything against them in a physical way. But France has got serious problems. They have a 27% Muslim population with some very nasty viewpoints and France may have to stamp down with some real totalitarian measures to sort their country out.

Whereas Donald Trump is a softy, and Nigel Farage is an intellectual (rather like Patrick Jane in some ways). I think Marine Le Pen, coming out of the country with it's bloody history, has a real change of opposing the globalists in a frightening way!
Posted by No name here. at 13:03