I got the idea for this article while reading M.Stanton Evans book on Joe McCarthy. It is almost as though when I the mainstream story about McCarthy it criminalised the pursing of criminals in an investigative way in my mind. But as I read things, a truth in some area will often unlocks a truth in some other area.

The one I want to highlight here is 'A mechanism for users to block abusive users'.

It's worth nothing that when I revisited this list, some of the hard left handles such as @marxistgold and @UrCommunistM8 had deleted their accounts.

So, these people have all blocked me, according to Apple or Twitters idea, I must be an abusive user. However, my style is not to abuse people on twitter and accuse them of dreadful things. Mostly my style is, when a debate is starting, to keep the person focused on the point they are trying to avoid, and, in my experience, it is the left that resorts to personal attacks in order to offput their evident lack of argument (the point they are trying to distract from with personal attacks).

This is not them most common sort of block though. Over, and over, and over again I was blocked on twitter because I had an argument that was better than the leftist. The block from the leftist was the way for them to win the argument. There was no aggression in a lot of these conversations. They were hardly interesting enough for me to continue talking with them after the debate was finished. But they like to block because if I am blocked, in their mind, it means they are right and I am 'abusing' the precious snowflakes. 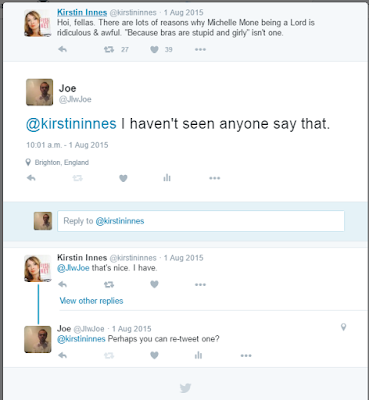 One of my first blocks. It was early days in twitter I did not know at this point that leftist blocked at every opportunity or that they are complete lying hypocrites, part of me did expect an answer to that question. It was an honest question and would not have been difficult for her to snip one if she really had any examples.

Another good example of where the person blocked purely because of argument losing is @KaiHolloway, who is/ was a doomsdayer and had previously worked in the army. I said to him that if the negative elite were as powerful as he said they were then they would be doing far worse at the moment but the fact that they are not is evidence that they are being opposed at the highest levels. There was no rudeness on my part, he blocked me... This was apparently a tough guy that could not handle an alternative opinion.

Here was another ridiculous one:

She blocked me after this. There was no indication of any conflict here! (My point was clearly wrong though, my views have changed since I first went on twitter.)

How abusive must I have been to make this comment! A crime indeed. Here is another one, I was having a debate with @The76Percent who did not in any way object to this person suddenly coming into the conversation, insulting me then blocking me. The left and their selective ethics:

I am not out of examples here but you get the point.

The left have a very simple debating tactic most of the time (this certainly does not apply to all of them. I have said many debating comments to @Rachael_Swindon and not been blocked. A true lefty, worthy of respect). The lefts debating tactic is they state something or criticise something, and if you respond to them then you are unequivocably condemned by whatever tool the leftist has to hand but without any reference to the facts at hand... Strange way to live.

We can see this in failed attempt by Youtube to get it's 'youtube heroes' program running; where progressives are given administrative power to go through youtube and censor content they don't like. This is clearly a rather exact early recreation of George Orwell's 'thought police' featured in 1984. It must oft be repeated that 1984 wasn't an instruction manual.

It is perhaps not of a great deal of importance, but the fact that twitter has a blocking system to 'criminalise' 'thought criminals' is what Apple is reaching for in that letter to Gab's CEO. In my experience, blocking most of the time is not used to block abusive users but is used to block users responding to comments that are in some way unpleasant, or hypocritical. It is also a fundamental point with the blocking system that the other user can see that they have been blocked!

These are the sort of users Gab will attract if they add a block feature... Wankers!

Not to worry though:

Andrew answered this communication from Apple directly to the point. Well done Andrew!: 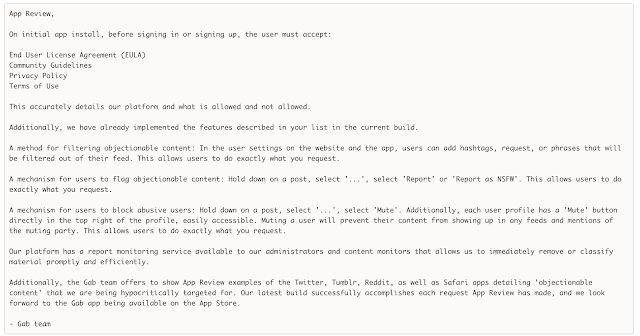 I love that last line there.

Additionally the Gab team offers to show App Review examples of the Twitter, Tumblr, Reddit as well as Safari apps detailing 'objectionable content' that we are being hypocritically targeted for. Our latest build successfully accomplishes each request App Review has made, and we look forward to the Gab app being available on the App Store.

Twitter, for the moment has some advantages that Gab does not have including a larger outreach, not being in beta mode, with more tweets available per page then Gab. This is why Trump and certain other figures prefer twitter. However, there is a lot of dissatisfaction with twitter.

I do fear that Andrew would think a block feature is harmless and it may in fact be. The dominance of progressives on twitter is in large part due to twitter targeting people like Milo and a lot of others and chucking them off the site. However, to me, it seems the block feature turns a social media into a cesspool as morons feel they have licence to say whatever they want. Fountainhead left Gab recently because he was protested at by Gabbers for making things trend no one wanted trending (Like #StopWhiteGenocide). Had Gab had a block feature Fountainhead would no doubt have blocked the most vocal naysayers to his great wisdom and continued on for a lot longer upsetting the Gabbers.
Posted by No name here. at 22:06