Still looking into Islam a bit, although despite what I said earlier I have not yet been able to go back to reading that book.

The pages from www.thereligionofpeace.com are a good source, when I first read it I felt like it was too harsh and I should be careful but after having read the Qur'an, now going back to read articles like:

Is the Quran Hate Propaganda?

I realise that this site uses excerpts of the Qur'an itself and from having read some of the Qur'an I can attest that excerpting truly hateful passages is not misrepresenting it. I have yet to find anything positive in the book:


Although nowhere does the Quran say that Allah loves those who don’t believe Muhammad, there are over 400 verses that describe the torment that he has prepared for people of other religions (or no religion):

I am starting to process it and label it in my mind as a purely service to self religion. To the argument some make that the bible is also negative, the bible is in fact a little bit negative in relation to historical events in only a few chapters. Secondly, parts of the bible were identified as coming from a negative entity from the Law of One material (although the thrust of the book including that to do with Christ is positive). 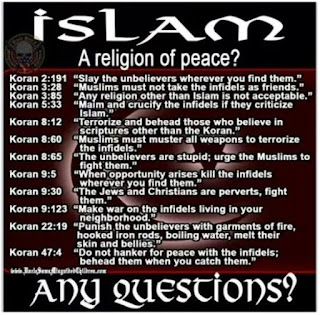 Recently, Corey Goode (an informative commentator in some far out areas) has stated something obvious, that Stargate SG- 1 is part of soft disclosure. I have often found Stargate SG- 1 interesting and a little inspiring at times.

There are many groups in it that bear huge similarity to real countries in my view. The Clingons are a little African in some ways, physically strong but essentially good natured. The Dominion are the Muslim middle East, Cardassians English, Bajorans, Irish and Scottish, Romulans Russian etc.

These are fictionalised and hugely, hugely inaccurate in my view. I would not want to compare the English to the Cardassians or the Africans to the Clingons in any real way. But there are very wide similarities.

In it, there are almost biblical forces and spirits involved. The Prophets are spiritual entities that are worshipped by the Bajorans who send visions and can manipulate time and show almost godlike ability to destroy whole fleets of ships at times. The Pah Wraiths are their opposition that sometimes get the upper hand that are extremely negative.

There is a war going on towards the end of the Star Trek Deep Space Nine seasons, between the Federation, Romulans, Clingons versus the Dominion and Cardassians. The Dominion are evil in a 1984 or Empire sort of way, but they are not really committed to evil just a bit paranoid, a paranoia born of historic persecution. Perhaps a bit like Israel. (I forgot that connection, the Founder actors are somewhat Jewish) In fact very similar in a lot of ways. 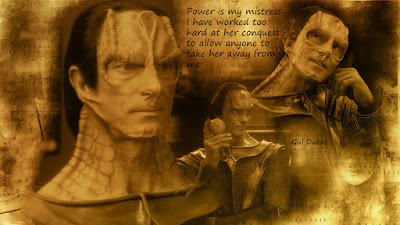 Although it starts to become clear later on that the real adversary is a Cardassian named Dukat who is a war criminal who becomes transfixed by the Pah Wraiths.

To me, I wonder if that is a bit like what Muhammed was like? Or if that situation is the same metaphorically. Although from the sounds of it he has more doubt about himself than the enthusiastic bloodlust of Dukat. (Muhammed doubted he would get into heaven and felt his aorta severed as he died, which was Allah's described punishment for someone who produces false prophecies in his name).

Back to real life, Jihadists and global politics.

So, the Rebel may be a potentially corrupted source, being a bit close to Israel in a way that might have lead Lauren Southern to leave. However, consider this all the same:


The reason Britains security services were unable to follow this man was that they are following 10,000 extremist Muslims who are more threatening than this guy?

Quite possible. You don't need to rely on someone working in MI5 to consider that. There are whole areas of England completely taken over by Muslims.

Then there's this from Steve Pieczenik, who is one of the really in the know people as identitied by David Wilcock (once removed of Alex Jones constant interruptions):


Here the perspective changes as David Icke brought up. The Western world is a big part of funding the ongoing carnage in the Middle East.

I wonder if perhaps to these people the problem of radical Islam is that if there are arrests for 9/11 and a withdrawal from Muslim countries it will all die down... Also, clearly the stopping of funding from Saudi Arabia!

I don't know, perhaps this is true perhaps it is not. But I wouldn't reflexively agree with this. These people seem to lack self awareness that these big arrests are not happening though despite talk.

When the world is not fiction: 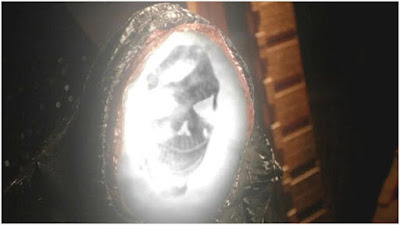 Stargate SG-1 despite being apparently important to folks interested in soft disclosure often cut corners and reduced funding all over the place.

At the end of season 8 they had created an immortal enemy so incredibly powerful that the way they decided to defeat him was to go up into the heavenly realms, the ascended realms and wink out his god like abilities on that plane. At that point his whole army fell apart.

Awesome on Carswell and also interesting that Farage and Banks have both alluded to getting Carswell to call a by - election in Clacton with his 'right of recall' ideas. I imagine Remain MP's, like my MP, shudder as they see this happening.
Posted by No name here. at 08:34