I watched the interview with George Soros.

This discusses heavy dark issues, perhaps some that some would feel I have no place talking about, but it is just an opinion.

Soros' perspective when asked about the fact that, when he was 14 he would spend time in Nazi Germany with his father, is that if he was not doing it someone else would be, so in the end there is no effect from his actions. For this reason he is honest about the fact he does not feel guilt about these events.

It could have been worse, I don't know the real story but I've seen two other claims put forward, that he turned out Jews in to the Nazi's and that he went with his Dad to kill Jews.

Firstly, if that last claim is true, if he was trained by his father to kill other Jews, then he never really stood a chance... did he? I am inclined to agree with him that if he was not there someone else would be and I doubt very much he is particularly high in the cabal hierarchy. Despite Henry Kissinger representing the Reptilians in a meeting with Corey Goode, I doubt Kissinger is high in this hierarchy either. The negative elite are not stupid enough to think that Kissingers name wouldn't be everywhere after this meeting. It is just laughable that a speculator (Soros), however large, is the one making the decisions for the cabal.

I don't know if you see where I'm going with this, or can put together the larger connections here, but to me Soros is a non entity, and I await the time when we will meet his bosses and the bosses above those bosses. I am quite certain that once we get high enough we will start to meet people with psychic abilities. 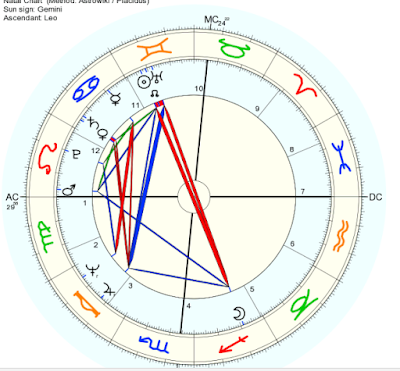 Wow, this makes a good case for the ascendant being an important part of the chart. He has always seemed Leo, there is something Lionish or regal about him.

This chart is exactly Trump, but then that's what astrology is, explaining what is; of note:

Sun - Uranus - North node in Gemini. A communicative person who has the inner call to a complex and advanced view of truth (possibly including free market ideas). This personality will become more themselves through their lives. Personality is a big thing.,

Above trine Jupiter retrograde Libra in second house. Money making or material things being closely connected with the personality to a large expansive sense. A careful balanced nature in relation to these things.

Saturn Venus Pisces 11th house bi quintile moon Sagittarius 4th house. An ability to deal with groups of sensitive feminine personalities with an eye towards extreme discipline of this feminine instinct, such as in making sure women dress appropriately. This is linked to a homely sense of deep emotional sensitivity that enjoys the adventure. This has a meaning that goes beyond pleasure and is spiritual.

Mars- Ascendant- Leo.. An outward sense of masculinity in relation to how people see his personality, and how he makes decisions. Including a regal sense of charm.

MC Taurus earth sign. No other earth in chart without minor aspects: Earthiness comes through work but there is no grounding in the personality if there is no work. Someone who needs to work. (Further linked on a deep level (bi- quintile) to the second paragraph on Jupiter).

Pluto and it's aspects to second house planets: A deep subconscious wound that feels like a need for survival and gains emotional security through material wealth.

There are similarities with this chart and my own. Although some of it not in any solid way. Firstly the small amount of grounding possibilities, kind of like a life path planning where the person is forced to do something in that area in order to stay sane. Secondly the obvious introversion of the chart, or not so much introversion but more that some areas are sparse which leads to a focus in the areas that can be done.

My blogs will probably be shorter and to the point now that I am back at work. I would normally have continued here but it's time for me to shave and skip down the road to my place of employment.
Posted by No name here. at 01:51