I'm getting a bit more of a 'smart' attitude to liberals now.

For one, I simply don't respond to their condescending criticism. Since they lost the American election, or perhaps just anyway, I don't see them as a threat. Not spending time on twitter helps. But perhaps its just my natural non attachment to certain things. I went out to buy a Daily Mail the other day because liberals are boycotting their advertising. When I got to the store and read the Daily Mail I found it to be fairly uninteresting, so I didn't buy it, I'm sure Daily Mail can survive a little liberal pressure, it has many readers who care not what liberals are up to.

The other day I saw something on facebook about how Trump and Nigel Farage were totalitarian fascists etc. etc. I didn't respond with an analysis of the post, like I might have normally, or perhaps an analysis would have been for a more intelligent post, I simply restrained myself and thought about it. Rather than defend Nigel Farage or explain that dictatorship is what the socialists do not the right wing, I saw this post by wikileaks: 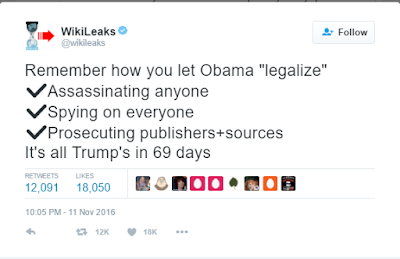 I copied it into facebook, to a self confessed liberal what can they say? It's only function is to make them feel bad really, because they do not respond to intelligent argument, there's no point... it's like talking to a brick!

Rather than put up sensible articles about what's going on I prefer to just put up photos like this, it subtly makes the point: 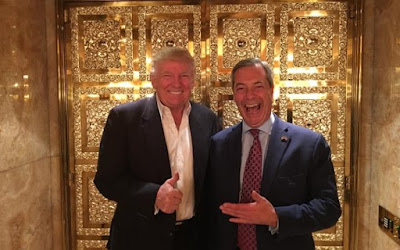 This confidence may be partly because of the Trump win. As well as this I am more confident in my thinking with liberals. The astro.com I have talked about website I used to get a newsletter from, I wanted to maintain that contact because I do have an interest in that area. For some reason shortly after the Trump win I unsubscribed. This feeling has also travelled into other areas of my life that I will not be making so much effort with certain people that don't seem to give much, or anything, back.

This is one of the profound sociological changes that is no doubt happening all over the world. At what point do the liberals get to a point where they have been giving too little and taking too much and it takes a toll on them? Many of the times I have watched karma though, closely, I have found that people change their behaviour thereby voiding the karma. so in that case a lot of the time karma actually does what its meant to do!

This is the chart for now- ish: 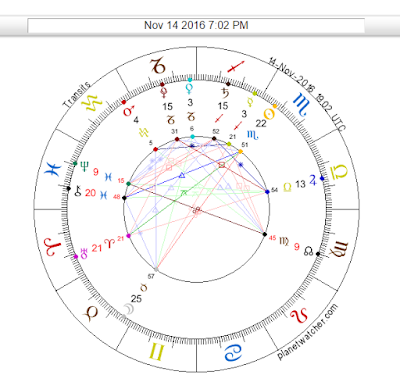 We are at the full moon. The largest for the next thirty years or so but that's not what I wanted to talk about.

What is interesting about this chart is that if you look at the Sun at 22 degrees Scorpio and Chiron at 20 degrees Pisces you will see they are in a trine connection. Two days ago abouts that would have been exact and it was then when the world was fussing about Donald Trump and Russia. This is interesting because as I have mentioned before Chiron very, very often seems to have some sort of Russian connection.

The Conservative government of today is extremely arrogant, they show all the hallmarks of those who believe in some sort of divine right to rule. First, they insult Trump left, right and centre over twitter, and in speeches. Arrogant liberals. Then, understandably he doesn't contact them quickly and does have contact with people that he does like and who don't put him and his team down, Nigel Farage.

Rather than being apologetic at all the Conservatives then explain explicitly that Nigel Farage is nothing to do with them, i.e. someone Donald does connect with and could ease the conversation has nothing to do with them. That would be bad enough but not only that, NOT ONLY THAT, but the word is also that Theresa May should 'lessen Donald's policies' or some crap, from a superior position of wisdom obviously; and Boris Johnson is saying to Trump that 'Assad must go' (three words that immediately identify a globalist) and that Trumps ideas on Russia are no good and he should follow UK foreign policy demands.

This is only topped by Benjamin Fulfords report that Hillary cried a river when she was told she wouldn't be allowed to rig the election.

I wrote in a previous article that the negative strategy seemed to involve self destructive influencing mechanisms. Perhaps the negative polarity damages the spirit/ mind etc. to the extent that these things can't be avoided.

Anyway, back to astrology. On Russia, our 'collective wound' we had that aspect. Also, we have Sun inconjunct Uranus. Uranus is that sense of extremely technically advanced revolutionary, that sense when you look at all the different pieces of some sort of spiritual enlightenment. JJ Abrams 'Fringe' is very Uranian and Uranus things are very truthful. Uranus is often made up of loads of different small pieces of information that lead to something brilliant, like music, or astrology.

That is obviously coming through in wikileaks and the like. What is interesting is the Sun has just passed over an inconjunct. The inconjunct means that you should not connect these two things directly together otherwise you will get a sense that an incredible amount of energy has to be applied that is synonymous with a kind of sickly paranoia.

So this means that this revolutionary - Arrests or whatever should NOT be addressed or acted on at this time. At least the Sun, the 'personality' of the world does not. This is the exact thing that Trump has shown. (To be clear though arrests are more Saturnian).

In about a month I would expect things like that to move forward, when the Sun moves over Saturn and trines Uranus. The misapplied connection of this energy may be the protests we are seeing in America.

Otherwise, something else to mention. We are coming down from the full moon now so I do wonder if these protests will simply not have enough energy to continue, or continue at their same level of intensity. Especially two weeks from now in the closing square.

Michael Moore to most people is exactly what he looks like, a person who gets it but prefers the money or whatever other benefit he gets from being a turncoat and fighting with the establishment.

I wonder though. I believe the reports by Svali that a lot of Illuminati stuff happens with paedophilia and mind programming and some of their operatives seem like perfectly nice people when you meet them.

Another point on the 'cabal' is that there is a time when they were two separate factions. The Rothschild and the Rockerfellas. These factions viciously warred against each other and to not understand this leads to a great confusion in the conspiracy circles. You had the Rothschilds, that used banking and socialist policies to take over everything, and the Rockerfellas, who use industry and war to take over everything.

So when you see someone like Al Gore he is from the Rothschild faction, using his global warming arguments to undermine the Bush industries oil revenue. This is also the faction Michael Moore would be a part of perhaps. If you look at his record he has been critical of the war, he campaigned on healthcare obviously to get Obama's health policies through. It is all about attacking that side.

Michael Moore is a piece of slime, how can a person be as fat as him seriously? He would need to eat about five times as much as I do. What mindset is it that maintains that level of greed?

Gregory Mannarino has this to say:

A summary of what he says, reading between the lines a little, is now the administration isn't self destructive and incompetent, he is not sure we are heading for a mega correction crash like he was... Although, to be sure, mathematically, there is a strong case for it.

We do not know what is going to happen in the future. My hopes though for a Trump Presidency and a shift to a more libertarian free market, small government viewpoint, is that the working class will be empowered. That is the first step because once that is completed it cannot be undone. If immigration stops for instance, we start to see improvement. Once the working class are empowered the political class will be further marginalised, and things will continue in an ever stronger march towards the right people being in power (as Benjamin Fulfords full last post seemed to put forward as the plan).

I don't know where the breakthrough will come but I believe it will come somewhere.

As another side note, a side not that seems quite eccentric here, David Wilcock once said that the negative ET's, the reptilians, had devices that prevented people being spiritually evolved through this new part of the galaxy our planet has drifted into and that there was no way to gradually switch this off, it was either off or on.

Obviously, a sudden switch off would turn a lot of people mad.

It struck me today, they just need to build another one... The good guys, that can be turned off slowly.

As you might have surmised from my last comment there, I believe in all sorts of mystical abilities such as telepathy and other things and even that these abilities are such an integral part of life in a way they are just 'there'.

My last post on Saturday felt like it gave me back a strong energy, I do not know why or what I said, but it felt significant. Perhaps sixth density women read it and sent me back some energy I don't know. I missed a post yesterday in what must have been the only one in about a year or so! Incredible tiredness yesterday.

I'm reading this fiction book from an author I wonder if is sixth density.
Posted by No name here. at 12:15