Still with the stagnation unfortunately.

As I might mention most days in future, there are still three things that can actually change something and they are not happening. Lets count this as day 1 when none of these are happening:

A) Any new information and updates on this Nazca body on Gaia.
B) Any new headway on the Brexit negotiations.
C) Any new arrests of the DNC members in America, such as Loretta Lynch who is being investigated for stunting a previous investigation into Hillary Clinton.

There are a few positive things though. These are really about playing around the edges though and not so much to do with anything central but still potentially big moves:

Two groups of people who feel, and whose feelings likely will in some way be protected.

CNN have been moaning about everyone hating them... Which is ironic since they are being caught out on genuinely bad behaviour, and have been carrying out hate campaigns against other people, which they admit!:


... there has been more about the EU bureaucrats being 'so angry at Britain'.

In Stefan Molyneux's short book 'A guide to human farming'. He says about the politician that he is fictionally addressing that congradulations, you have the same function as a hood ornament on a car, and not much more use! David Icke has similar ideas.

Perhaps the net result of putting these people in sheltered positions, University students, EU Bureaucrats, Radical Muslims (and a lot of normal muslims that don't mind radicalisation) and CNN reporters is that they do not emotionally grow above the level of a mentally immature sixteen year old! They have no ability to self reflect! (Also, jailing the university students is probably a vote loser!)

... and why are their feelings so sheltered? When they are doing acts that harm others in provable ways, such as the Iraq war? Because they are protected by negative beings whose consciousness is at a similar stage of development.

This will end at some point, and no matter how hard the alliance tries to use "kid gloves" with such people it will have to happen, because they are wrong!

Another point is, this video, that I have re- watched and find their to be a lot of truth in it I did not hear first time. Lauren's information is not easy to take in on the first time around ,she's smart:

There are so many stupid people about it is unreal. I had been looking at some alternative media youtubers posts. Very often I have come across a situation with large amounts of stupid people.

The absolute moronicness of the videos that people are watching and the things they believe from watching those videos is an incredible level of moronicness, and this is the most popular on youtube!!!

Even when an intelligent video gets made like this one, the comment with the highest vote was:

The second and third etc. highest rated comments were not a lot better.

Note: Just as I upload this I see a tweet by someone regarding idiots and animal cruelty and am reminded how incredibly common that is! 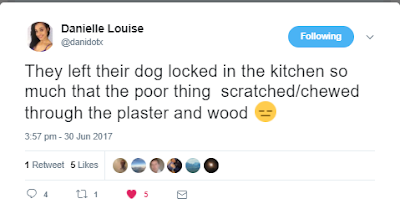