So, still talking about Glenfell, wondering if there is some conspiracy related to all this... Here's the chart: 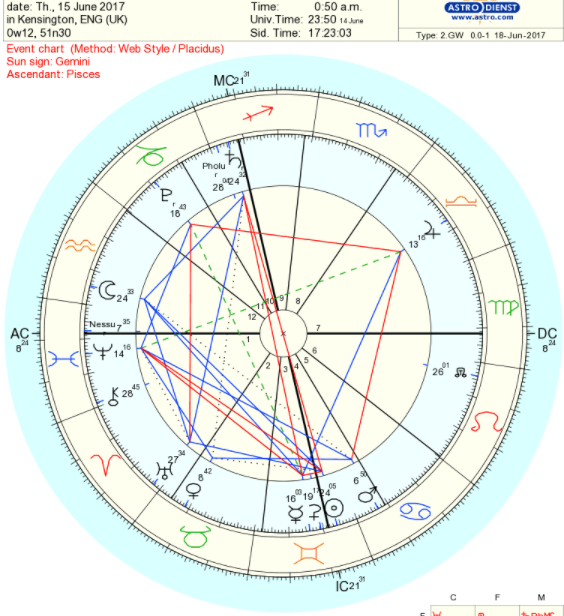 That incredible feeling of unfairness that is related to this subject is shown by Nessus (which means precisely that) on the ascendant.

The sesquisquares and inconjuncts perhaps mean that this was so tragic that it might mean that there will be no understanding of it for quite a while. Perhaps even another life.

The moon that has now moved into the first house is related to the emotional feelings around this, all first house stuff and appearance.

Mercury moving over the sun now is showing what's happening today. With some more sense being added to the whole situation.

The chart is a dark, creepy chart and the fact that the ascendant is in Pisces perhaps shows what I have said about it being 'of the devil' almost.

Saturn soon to conjunct the events Pholus could lead to a chain of events related strongly to the European Union (how Saturn is manifesting at the moment) in relation to this incident. This may include the European Union suppressing the information to do with this somehow.

There are more questions on Glenfell: 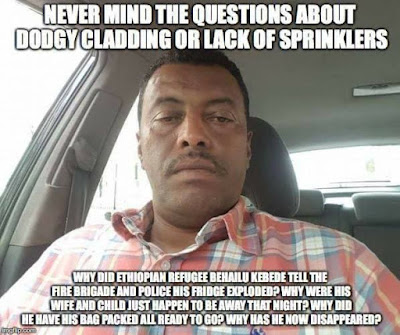 While I think I would want to disappear if I could from an angry public demanding justice the part about him packing things up beforehand is interesting. He was also quoted as saying that when the fire started he packed his bags for five minutes before phoning the fire brigade.

Of course the May campaign, the 'Alliance' don't understand people needing the truth (cue psychology of someone who thinks they can fob the people off with 'partial disclosure') so the media will likely not release a list of victims if it is not deemed to be important to the higher ups.

This also makes no sense because how can there be no 'survivors'? (I tend to believe this woman). People were jumping out the windows! So there are at least seven floors where people can jump out and only get comparatively light injuries compared to being burnt alive. How many residents were there on the first seven floors? Probably more than the so far stated death toll. At a push that would probably extend further up the tower for more resilient body types. It makes no logical sense.

In fairness, there is one person here who says he has met a survivor:

There are too many questions here and not enough answers.
Posted by No name here. at 07:09