Well, today is muggy, but not hot... Waiting for the rain... I love the miserable rainy English weather... Spot of heat will do that!

This will be my last shift before a one week holiday, in which I am able to apply for many jobs! I forgot how many little things need to be handled to successfully jobsearch!

Now though, THIS is big news:


There are two ten minute episodes following this introduction, I have seen both and the whole thing does feel like a genuine discovery... The skin is not human but reptilian! The videos used for the skeletal analysis were dated 19th June, so Gaia really is exploring the situation as it happens. Which is very good for truth seeking. If it turned out to be something terrestrial then they would have to explain that as well, and if they wanted to suppress any truth they suddenly found, it would be very obvious.

Gaia really is one of the modern truth tellers! They really have been trying to produce the information that will free the world. We'll look back on them as heroes.

The crushing of the naysayers on this will be very satisfying: 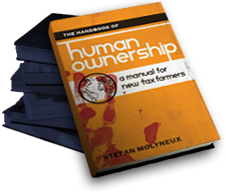 I started reading this short book by Stefan Molyneux. It is utterly, utterly fantastic:

Stefan Molyneux: The Handbook of HumanOwnership: A Manual for New Tax Farmers


Naturally, the true goal was the exact opposite. Rather than focusing on practical, economic and entrepreneurial knowledge, government schools quickly shifted the educational focus towards patriotic history, rote memorization and recitation, Latin and Greek, and an endless plethora of other useless and boring trivia. This was the sports equivalent of forcing your competition to take naps instead of training, resulting in a truly delightful absence of competition for medals. Government schools created dull, resentful drones only fit for taking orders, so the threat to the managerial class was averted. (All this started in Prussia, which was medieval, mystical and militaristic, which should have been something of a clue for everyone, but again, thought hurts, apparently)

The whole thing is how the negative views the world. Where I have already read the positively polarised/ Biblical view of the 'harvest' and the 'harvesters'. This is the negative view of using people as cattle for taxation and the protection of the unproductive privileged minority.

The book talks about firstly cannibalism, then keeping people within certain family traditions for work and then, the industrial revolution, taxation of goods, and the protection of the corporatists by making a company a legal entity.

I notice even now there is a quite a class barrier, when looking at jobs some require a bachelors degree. That would be one of those things that includes accepting the brainwashing of state school university (I had teachers that hated my non acceptance of leftist dogma and marked me down accordingly); and, currently leaving school with about £40,000 debt... Conservatively.

Anyway, here's hoping something will change soon. I see some politicians are still trying to stop Brexit.
Posted by No name here. at 23:32