Wow, so much to say! I don't know where to start!

Firstly, in my opinion, this video by David Icke is fantastic! ... David is not a left wing cultist but is not really right wing either, but in this video he mentions the globalist assault on small business and that nationalism is something that opposes globalism and that's why there has been so much immigration... To dilute nationalism:

He mentions a good area to research, Agenda 21 and the gentrification of rich areas to create a 'Hunger games' society... (Where the poor have to live in "settlement zones").

This is another uncomfortable area I have been looking at, here is some information on Mr Corbyn:

Kauilapele's blog: Benjamin Fulford 6-20-16… “In a first US Supreme Commander General Joseph Dunford addresses the UN as head of Republic”

The black nobility, for its part, is fighting desperately to keep their EU fascist government intact. They staged a killing (real or fake is not clear) of pro-EU politician Jo Cox to try to manipulate public opinion towards staying or at least create a plausible cover story for a planned vote stealing of the Brexit referendum due on June 23rd. WDS and Illuminati sources have both previously corresponded with Jo Cox when she was identifying herself as a Rothschild agent. If the British people vote to regain their independence, it will be a huge blow to the black nobility.

And this is something we know about Jo Cox... She is on this list:

The Independent: So, who are the 'moronic MPs' who nominated Jeremy Corbyn for the Labour leadership contest?

She is also one of those people that ignored serious child grooming by Muslim gangs while promoting multi culturalism and her favourite charity was 'The White Helmets'.

Next, we have this:


Theresa May excerpt: The coroner of the Lakanel house, did, as I understand it, not say there should be sprinklers in every one of these types of properties.

She wrote to him, and she copied in the Southark and London Fire Brigade, and she made a series of recommendations, and one of the recommendations was clearly, that landlords retrofit those buildings, buildings like Lakanel house, tower blocks, with sprinklers.

Liar, Theresa May damned by lies. … and Pickles ignored it Eric Pickles, because Pickles, and May and everyone else that sits in Westminster Hall the whore masters, and whore mistresses, are owned lock, stock and barrel by the billionaires that want to take over those building. What did Jeremy Corbyn and Diane Abbott and Tom Watson and their ilk do across the floor? They sat on their hands while Theresa May told a whopper of a lie.

This was cut down because of the strange necessity of reducing the amount quoted because of a sort of copyright! ... probably Richie wouldn't've minded. He calls Theresa May a liar about ten times that I cut out.

He goes on to say how all the different news sites would have known about this intimately.

This makes me wonder, on top of the Jo Cox information, if Jeremy is in fact a globalist! I think it quite likely, after all we don't know what he will do if he actually got anywhere near power. He is supportive of the Unions and hard left overthrowing the government like the Democrats seem to want in America, and he has said nothing about the London Bridge terror attacks! His statements line up quite neatly with the globalist agenda. (Lauren Southern was right!)

Johnny Depp a globalist, and probably a slime ball as well... Ouch! I have loved some of his films and repeatedly watched them... Ouch! 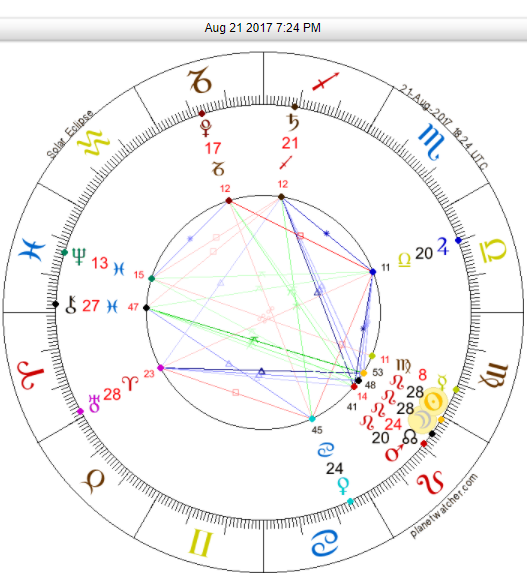 So there is this big eclipse over America and some in the alternative community are hoping it heralds the end of the Illuminati.

It hits my chart thusly (irrelevant details like semi sextiles, and non relevant asteroids, [most of them in this case], are missed out):

So this eclipse will effect:

All of these aspects relate to the non personal part of my life, to the more collective, and to the wounds that I have been carrying from being thrown off my path.

Although, many times these transits exist, in my opinion, not as an actuality but as an opportunity that is squelched by the negative forces. Although the energy of enthusiasm for change remains.

It may give me some insight into six house issues as well.

This is an interesting video considering a perspective that I had not:

It gives you a sense of the Illuminati perspective, which is something like people are so stupid they deserve to be ruled.

The answer to this video though is that things will change and they will come from a place far up in the hierarchy and will change the reality of all these more "stupid" people very quickly. So keeping to the truth is not just an effort to awaken people but it is also an effort to prepare from inevitable change.

An example of this potential change is the EU negotiations happening and the many interesting potential for arrests in America. John Podesta testifying, Hillary Clinton back under investigation, loads of paedophile arrests, MSM exposing CIA drug trafficking, Macron coming out against the globalists, and this very important stuff with Yemen; et cetera, et cetera, et cetera.

I may check youtube top 20 now Lauren has mentioned it!

Today all that complex analysis I did yesterday seems obvious... They don't care! They're function is to come into work, make sure people work reasonably effectively and go home. It does not matter to them if the people who are working in the business are happy except in mild incidental ways!