Well, we've got more info. on the London attack:

Here he lays down the law for all the new age people reaching the wrong conclusions!

He says that the London attack was a legitimate attack from the Islamists and that they get angry when someone does a false flag. So real attacks often follow a false flag.

This is perhaps the reason that the Bataclan theatre that was a false flag:

What the Mirror is ACTUALLY saying with that non committal headline is that there were military white skinheads helping with the Bataclan attack. To prove that they are legitimate Islamists was probably the reason the Muslim attackers did disgusting things like castration and eye gouging to the Bataclan hostages.

But there is something else of note in this discussion:

A Fatwa like the one issued can overcome the Qur'an itself. However, I am not sure whether this just applies to a certain sect in Pakistan or whether it would apply internationally. 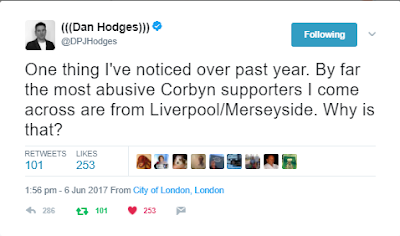 What's Dan got against Liverpoool?

Well, exciting stuff. It is the day before the election so I am going to call it. 75 seats in Theresa's favour.
Posted by No name here. at 23:33