So I have the answer I believe the explains this new Trump behaviour:

Stillness in the Storm: Benjamin Fulford -- April 8th 2017: Trump missile attack on Syria is a sign of Khazarian mafia desperation

Basically, Trump was threatened with the tape Epstein took of him raping a twelve year old girl.

The path Trump has started on is going to make all sorts of irreversible karmic dents that lead to more and more problems for him. It appears that Trump and his team consider there to be a real risk of nuclear war from these behaviours:

(This video was not on my subscriptions as I highlighted on twitter):


Now that he is using taxpayers money to fund his golf trips, he is coming away from his political stances. A small point in the midst of the death and potential death of the west, but small points of karma are still unyielding.

Many people, his intelligent supporters have now either turned against Trump, or are specifying that they don't agree with this behaviour but he is still the best option; but there are people that had committed to him like a cult: 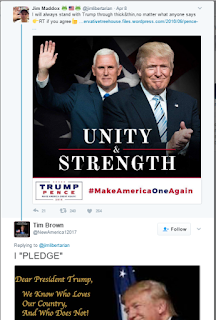 The surprise globalist in this whole endeavor has been Maajid Nawaaz: 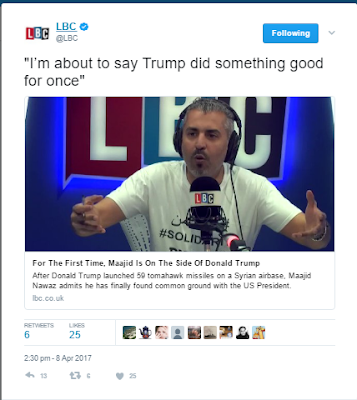 I have spoken positively about this guy before and thought of him as positive but I do not anymore.

Personally, I have finished watching Continuum on Netflix and I am profoundly grateful at binge watching the whole three and a half seasons in order to get through this. It has been upsetting the Trump has turned, When I stopped watching it briefly the other day I was overcome by this sense of grief, like a bottomless pit inside myself that I might fall into. After reading Benjamin Fulfords update and sleeping on this, getting involved in a tv show and mostly boycotting twitter, facebook, and youtube for a while, I feel that I have processed this event a little.

It appears as per the Golfing video and articles like this that war is considered a legitimate possibility by many of those in power.