Is Russia going to do anything or are they just bluffing? A valid question if ever there was one.

Russia is meant to have a missile defence system, a ship on the coast of Syria capable of shooting down any aircraft, they put it in after Turkey bombed their pilots.

The utter betrayal of Trump of his supporters is still something I need to process. I have not even been able to face the news despite most days previously,  almost every day in fact, having followed the news all day.

Bad times. Even when it first happened I was thinking that surely the news of why it happened behind the scenes will come out, but it won't come out yet. Or even commentary that helps us all process could come out as well.

Nothing too insightful though. Paul Joseph Watson is loudly proclaiming the reality. 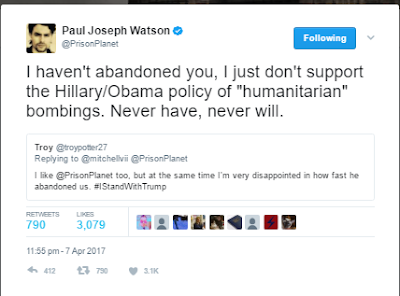 There aren't really words here. Just waiting for Corey Goode, David Wilcock, Benjamin Fulford, and to a lesser extent infowars to come out with any deeper insights on this area. The story might in fact be exactly what it looks like... Trump has switched sides!

There are some people still supporting Trump. Some 'deplorables' that have stayed the course.

We'll have more information soon enough.
Posted by No name here. at 06:57