Yesterday I talked about how if Nuttall/ UKIP won Stoke the remainers would likely topple Labour and unify.

Of course, that's no reason for him not to win, what it actually means is that the polarity is increasing in that UKIP are gaining in power, so, to allow free will, Labour will also have the equivalent opportunity to increase the equivalent opposite power.

Luckily though, it seems the public have no appetite to stop Brexit!

Paul Nuttalls speaking recently about how he had had a bad time rubbed me up the wrong way. Nigel Farages style is completely different in that Nigel is able, like Trump, to put the media on the back foot when he speaks. He uses terms such as 'the establishment political class', effectively minimising such people in listeners minds, and would bring it back to Brexit and the benefits UKIP would actually bring. 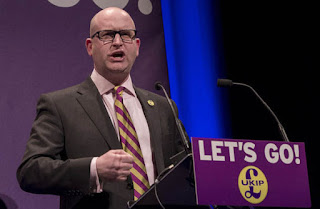 Nuttall however has fallen back on ideas such as the 'unity' of UKIP. This is UKIP's new mantra. Unity... Might as well say 'tolerance'. Which is what bastards convince someone to say when they are too powerful for someone to oppose them and so that person has to "tolerate" them. Nigel Farage has said recently that UKIP have people within it that want to turn it into a mainstream party (he also stresses this as an important by- election).

Luckily Nuttalls second in command is saying some good things. Basically there is still a fight, or to put it more bluntly, still a victory, waiting to happen between Carswell/ Evans and Farage. The stronger UKIP is, the more likely Farage/ Banks/ Kassam will win out in my opinion.

Also, I've been paying attention to Alex Jones and what he says is that Trump has been doing so much, passing so many orders that Alex cannot even cover it. He also laments that the media does not cover any of these things.

This is interesting because it may be that even though there is not much news and things seem a bit slow. In fact, things might be moving faster than they ever have under the surface, and we will realise this when we start to see the results.
Posted by No name here. at 12:01