Irritating story and the history of Islam.

Daily Mail: Make-up artist, 22, and her boyfriend, 27, agree that SHE can sleep with whoever she likes but he must stay faithful after she told him she would leave him otherwise

Where are this girls parents? Where are the male members of her family to give her a clip around the ear!

This kind of thing only happens in a society where women dominate.

Also, there seems to be efforts by the Daily Mail to misrepresent this story. The actual incorrect title of the article is: Make-up artist, 22, and her boyfriend, 22, agree that SHE can sleep with whoever she likes but he must stay faithful after she told him she would leave him otherwise.

When I copied this onto facebook and twitter, the focus was on the guy, if you just read the headline you might think that he volunteered to let her sleep with other guys but on closer reading that is clearly not true: 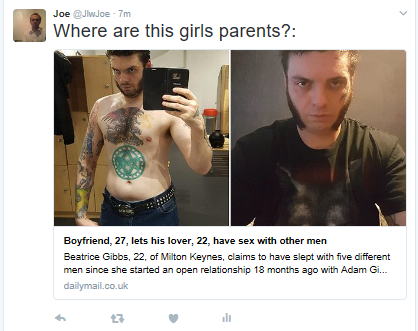 This is what happens in a society when women start to have dominance. The mainstream establishment politics caters to womens biological needs in that it creates a strong in group that protects women from any criticism. But it does not cater to men in that opportunities for advancement and meritocracy are cut off by those at the top. Who create empty sychophants to advance their own agendas rather than applaud genuine hard work and merit.

This will change soon!

This gets closer to what I have been trying to discover, whether Islam and Muhammed was inspired by negative or positive entities. Even though the LoO hints positive there has been very little evidence of positivity so far and even the suggestion that it may have been negative channeling from the beginning.

However, this video casts doubt on the entire story. This man documents how terms such as Islam, Muslim, Mecca and the Quran didn't appear until 50 - 300 years after Muhammeds death. That for hundreds of years after his death the Kahba of Mosques faced Petra rather than 'Mecca', and other evidence Petra was the places described in the Quran not Mecca.

With this information I'm starting to get a picture of what the agenda might have been. Why Mecca in that particular location? Saudi Arabia!!! That totalitarian state that lives on oil. (This means that the soul that incarnated to become Muhammed likely, had not intended to give Saudi Arabia power and legitimacy!)

It seems that Muhammed got on with his activities, including conquest and the Arab world followed his lead. However, later on, many power hungry rulers created the religion and formed it as an ideology that opposes Christianity.

If there ever even was a cave and an angel Jibril is not at all certain. Although, Jay Smiths narrative does legitimise Ibn Ishaq's work who originally stated that when Muhammed met the angel first he was terrified and felt the entity was a demon.