Sky News: Could Geert Wilders help the Dutch provide the next election shock?


The Dutch vote in a General Election on 15 March and the alt-right Freedom Party is currently the most popular party.

Telegraph: Theresa May poised to announce end of free movement for new EU migrants next month


The announcement means that the "cut-off date" for EU migrants is likely to be around March 15, once the Government's Article 50 bill has gone through Parliament.

Zerohedge: Stockman: "After March 15 Everything Will Grind To A Halt"


“I think what people are missing is this date, March 15th 2017. That’s the day that this debt ceiling holiday that Obama and Boehner put together right before the last election in October of 2015. That holiday expires. The debt ceiling will freeze in at $20 trillion. It will then be law. It will be a hard stop. The Treasury will have roughly $200 billion in cash. We are burning cash at a $75 billion a month rate. By summer, they will be out of cash.

Since I wrote that last blog I saw both these articles. They were always there but only now that we are in this new moon cycle does it suddenly become relevant!

March 15? Is there some metaphysical significance to that date? Is it a solstice or something? What's the deal? Nothing notable astrologically that day, I might even say it seems rather quiet! Aside from the by- election in Manchester that will come at some point I can't think of any relevant political news than these three events, and these are all big global events that have massive remifications. Unlike the Manchester by- election.

Just one of those things I suppose!

March 18th is three weeks on a Saturday!

The Sun: benefits cut PM’s policy guru expresses ‘regret’ after saying that anxiety sufferers should have their disability benefits ‘SLASHED,’ in move that ‘could save £3.7billion’
This is the reason people shy away from the right. I argued a little while on twitter with some people that were reasonable, but some that just wanted to assume the worst of everyone. Some of the relevancy here is I believe shown in the article:


He said: “Having experienced myself traumatic anxiety as a child carer living w alcohol I know all too well the pain anxiety and depression causes.

This from the minister that had brought up the idea to cut disability "benefit" as the Cameron government labelled it but can more accurately be described as "welfare".

It is likely that many of these anxiety sufferers are suffering from genuine problems such as overwork (or the one referenced by this minister), medical conditions that are causing a problem to them, such as food intolerances and problems that can't properly be diagnosed.

In my last post I referenced the welfare state but did so intelligently by clearly labelling how to create prosperity. By removing taxes/ tarriffs/ regulation designed to destroy business and alleviate competition of the corporates; and allowing businesses to thrive so there would be jobs to go to and peoples families would have more wealth and be able to deal with them. (Additionally reducing strain by reducing immigration would help.) 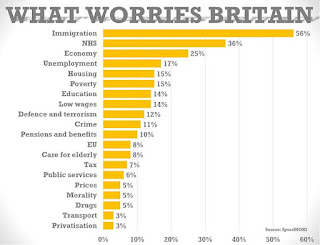 To remove the welfare system before that is put in place, and while immigration is keeping many people out of jobs, is just ridiculous and cruel. That should be clear but for some reason it is not for some people. It is clearly what a certain section of the right wing believe.

These people I always found exasperating when I was trying very hard to find work. They were the ones attracted by the Cameron government.

I also want to say, in my libertarian free market outlook that I have outlined would there be any need for tax?

I am not sure, I do not believe it is needed to build roads, business can do that. I cannot think of many government functions that cannot be privatised including, perhaps especially, police. No policeman is going to arrest the father of a 14 year old girl being raped and return her to the rapists if the community is paying his wages. What if community actually controls the courts via common law?

Perhaps. There are many people that need huge amounts of money for medication to survive. HIV, Diabetic Insulin, I think Luekemia, to name a few.

Of course when the whole Satanic system falls such things will be easily curable. But we are not there yet. I do not have the answers here but in China, no one avoids taxes because they are set at something like 7% and it is more effort to avoid them than to pay them... This seems ironic since China is totalitarian Communist.