Well, as has already been said, these G20 meetings are possibly very significant:

Trump and Putins first meeting... Will anything of any relevance be discussed? I'm sure it will, but will it change?... Will sanctions be lifted? Will "White Hat" activity be discussed such as movement on paedophiles and global disclosure?

We can't know. I feel sceptical personally believing this likely to be a "nothing burger". But nevertheless, we are approaching some future date when things will actually change so no doubt there are people connected to the situation who have the option and preference of changing things for the better.

This Eclipse has turned out to be far more interesting than I initially thought.

Firstly, lets discuss what it means just as it is. Leo, I have found, has some relation to a person as a 'myth'. Such as a god or hero. Or a superb villain. An example as already discussed may be Kaiser Soze in Usual Suspects, Red John and Patrick Jane in the Mentalist, and the protagonist and antagonist in the Hunger Games as shown by Jennifer Lawrence.

The Eclipse is over America and there is only one myth in America... That man's name is Donald Trump and perhaps Vladimir Putin... This is how the eclipse works this time and probably how they always work, I don't yet know much about them... It start with a full moon eclipse (lunar eclipse): 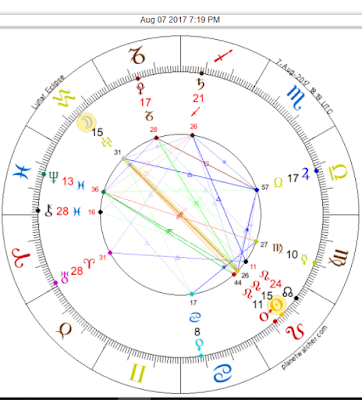 Then it moves on to a new moon eclipse, what is called a solar eclipse: 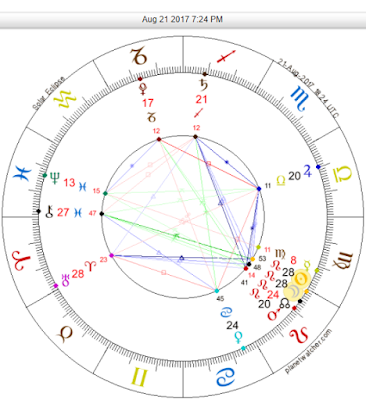 So, I would then imagine that the lunar eclipse ends a long running pattern and a solar eclipse begins a new one! This is my direct experience from ending my last job on the last lunar eclipse and beginning a new one on the solar eclipse. It also makes sense astrologically because the full moon is the height of the pattern of that moon cycle. As I say repeatedly especially in the end of the waning which is very boring, after the full moon little new happens and anything that does happen is usually the result of what happened in the first half of the moon. An example of this is argument following the Brexit vote that happened just after the full moon. It is drama but it relates to something that has already happened.So after the full moon, the peak of the cycle, the energy starts to wind down until you got to the new moon where it very subtly picks up again. Starting a new cycle.

One of which is being completed now we are a few days away from a full moon! This cycle though was characterised with Mars opposition Pluto in its first quarter, EU attempted intimidation, which was part of the same energy we are enjoying now that the UK has grown a bit of a spine in the negotiations, (I mention this current moon cycle again at the bottom of the this article).

So, VERY interestingly and a point that has been noted by many astrologers who are looking at this is that the solar eclipse happening over America is on the Presidents ascendant to within one degree. (Also on Trumps Mars that is conjunct his ascendant).

I will come back to this and pull it together with the rest of this post:

Lazily looking at different celebrities yesterday I found a lot that is worth looking at. Firstly, there are a lot of celebrities whose birth time is available... This is quite cool, a full chart... Heath Ledger, Jim Carrey, Brad Pitt, Donald Trump, Nigel Farage, Kevin Spacey.

There are also a few that only have a time but are still very interesting to look at. For instance, after I noticed how catastrophically I got Stefan Molyneux's wrong, leading me to come out with silly ideas that I previously hadn't agreed with, I also did a few others... This is Lauren Southerns: 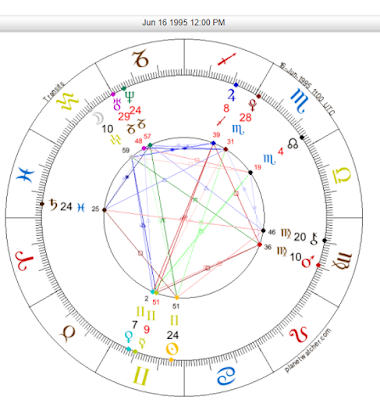 The main thing of note to me personally about this chart is that her sun is positioned over my Chiron. So who she is/ what she expressed, her total lifeforce to me would be relevant to Chiron and things I say in this area, when hearing what I am expressing through writing, she may see someone who is wounded- by- the- collective/ expressing a collective wound. The Moon - Chiron means she is focusing on a very deep level to how humanity is wounded and she feels this personally.

It is the chart of a nice somewhat innocent seeming person in my view so when I see these dodgy rumours about Southern I doubt them... The 'femme fatale'.

But here is the meat and potatoes of what I want to say, because this is what starts to bring the global game into some perspective:

It took me ages to get that name right for some reason. Shrimpleton, Shrimpley etc.

This is Michael Shrimptons chart. There is no birth time but because of the eclipses there is something to say about it today:

Firstly.. Who is Michael Shrimpton? For those who don't know, he is an English intelligence operative who has written books in the "conspiracy" field in order to explain to people what is going on.  His focus though explains a lot of things that have been said but not in any great detail before. Amongst the alternative researchers and commentators, it has been said that the root of the deep state/ cabal is partly Nazi. That after the second world war some of these people schemed through negative ET's and the secret space programs to manipulate their way back into power.

Michael Shrimpton names an organisation that he had the misfortune of running into that he calls GO2. GO2 is German Operations and he holds that they are the ones in charge of the false flags and the murder of David Kelly and many other crimes. This starts to label the 'bad guys' so to speak, to give them substance and location. This is clearly related to Angela Merkel doing the Eye of Horus at the G7, which was stated by people like Benjamin Fulford to express that she is the real power and the other leaders are just pawns: 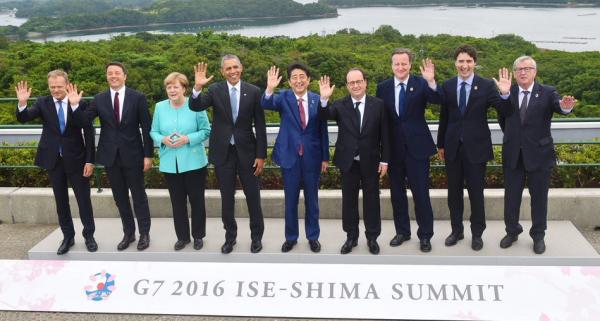 Anyway, bringing this back to astrology, it is notable that Michael has likely gained more of a following and recognition since the Grenfell disaster when he was interviewed on Richie Allen. There are more and more people going into the alternative media to find answers. So his rise is a recent thing. Also, he has only just burst on the scene with his first interview on Project Camelot in January of 2017.

So lets look at the eclipses... The beginning of the new pattern, the solar eclipse of February 26th was on his Venus- Mercury conjunction exactly. Mercury is to do with the way we express ourselves. Now the Solar eclipse of 21st of August is DIRECTLY ON HIS PLUTO RETROGRADE. All the dark conspiracy like stuff comes from Pluto. This means he or his information is likely to continue to grow and become very important in the future.

This follows a lunar eclipse... A closing eclipse with the moon exactly conjunct his Natal Chiron (inner wound, and behaviours we sometimes do when thrown off our path to get ourselves back on it), and also conjunct Lauren Southerns Moon. I imagine it is harder to see something as abstract as an energy pattern ending but it seems that for these two people, both of which are relevant to the alternative media, a pattern will close for both of them. It also looks to me as though this closing Lunar will lightly conjunct Donalds Pluto in the twelfth house. Possibly meaning the ongoing ridicule of the media that relates to his Pluto will start to close at this point.

The emotional relation to the global cold war:

Donald Trump recently went to Poland and gave a speech, there are excerpts in this video at around about 6 minutes:

Essentially praising Poland for opposing the Nazi's and saying they are going through a similar struggle now opposing the EU!

Here is another explicit mention of Germany in public discourse:

Twitter: BBC Question Time: Jacob Rees-Mogg quotes German politician Wolfgang Schäuble to explain that people knew what a vote to leave the EU meant
It seems to me politicians, now that Michael Shrimpton is talking about this are signalling to those in the know civilians, and otherwise, that they are against the Nazi's. The ones living today!

This is what the eclipse would seem to be saying in my view as well.

I can find nothing in any of this astrology, to suggest that there is any relation to extra terrestrials, (there being no aspects to Neptune in Pisces) this is against my personal preference and of course that means nothing in real terms, I would never claim something is not going to happen because I don't see it in a chart. However, the idea that a showdown between the positive intelligence community and politicians that back them up like Trump and Rees- Mogg, versus the deep state, seems to be all over this eclipse.

Closing remarks on the current astrology:


I often talk about Pluto!

In my view, in relation to scenes like this: 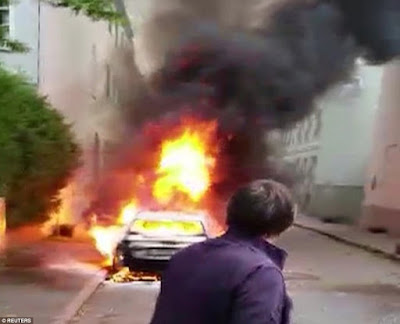 Daily Mail: Merkel attacks protesters who have ‘put lives in danger’ and trapped Melania Trump inside her hotel after German police call in reinforcements as streets of Hamburg turned into a warzone.

The previous title for this article was was something like: Protesters fire bomb a police station in Hamburg!

This, seen astrologically, is the approaching full moon conjunct Pluto.

But what is Pluto? As I have said a few times Pluto is what sees beneath the surface, and was discovered around the same time as psychoanalysis. However, what people associate with Pluto in my view is what comes after that... Seeing underneath the surface is violently opposed by many, many people. It's enough to get you locked up in a psych ward, in jail, or beaten up. Bad people do not want their crimes exposed.

With the full moon conjunct Pluto the world is looking at the situation in our institutions (Capricorn) and seeing... What the mainstream are saying about Putin might not be that bad! He's just a guy... With rational conversation and normal relating the hysterical fear of more manipulative people just falls away.

This is what this is. The left do not want people seeing Trump is actually doing quite well and a pleasant normalising of relations and communication is a good way to go.