(I am 'unsure' about no. 1 now. I felt like I got unblocked when I discovered a lie someone told me recently, and my 'truth censor' was temporarily blocked. Who knows!)

1) In my personal life, I've come to the conclusion that the massively complex stories that have become part of my narrative which includes multiple people lying may not be true. This has probably come from A) Some peoples behaviours might be described more as 'unpolarised' and I simply don't understand that since the foundations of my thought processes and lack of certain blocking behaviour considered normal in this society, prevent me from depolarising to a massive extent. B) Snippets of information where people are witholding information but not agressively lying have been escalated when I have tried to understand them (perhaps because witholding is basically 'unpolarised'.)

This means I will possibly go over my blog and modify some posts. (That I can find. I apparently write a LOT)

I don't know where this puts my spiritual practice of music etc. I am still playing it safe so I don't get any intuitions that the world does not accept.

2) Back to the 'world event's'. It has become obvious why the 'elite' have been trying to send EMP's via Tianjin to offset China's market, I had wanted to put an image up here but could not so will on my other blog. When China closes other countries stocks go up. Since there is nothing to counteract the rigging. 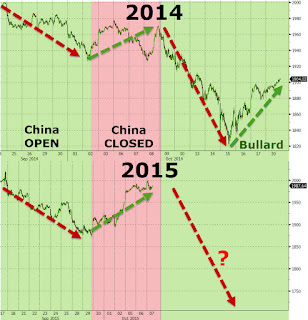 Secondly. Deutsche bank, which all the alternatives know about because of its $75 trillion of derivatives, Deutsche bank is not looking too healthy. Why the US decided to 'punish' Germany by going against VW I do not know, since DB has been effected and do they not know they are on a sinking ship?
Posted by No name here. at 14:40