Well, it's going down now. From zerohedge property firms are stopping their customers selling property and Italian banks are collapsing. Italy wondering if it needs a tax payers bailout of banks against EU rules and it looks like the whole thing is about to collapse. Including potential, or even likely bank runs.

Might it be saved for another week/ month/ year/ decade? Of course.... But it does not look good.

For a long time now I have felt angry when people don't listen to me on facebook and other things, and in life... I am a person of 'wisdom' but without 'power' people can choose to ignore that... It is my curse.

I occasionally thought of things going wrong and people suddenly thinking/ saying... Where's Joe to help me through this? He knows what to do and can tell me! ... and then I'd be gone. Like facebook account deactivated... But it does not work like that. I don't have to deactivate my facebook account. I am simply too tired of the whole thing and while my facebook friends haven't even recognised Chilcot, let alone the things going on that Chilcot is distracting people from; I'm not likely to highlight the collapse in equities at the moment and warn people all the more they must prepare... I just don't have the energy... And I have to work.

When something does happen the electricity may be off, or simply, I would have nothing to say that can be said in a few minutes... Or I will genuinely be elsewhere.

On Chilcot: Well it has turned out Blair was basically following the Americans. Crucially, if England did not go to war with Iraq the war would have still happened pretty much exactly the same. 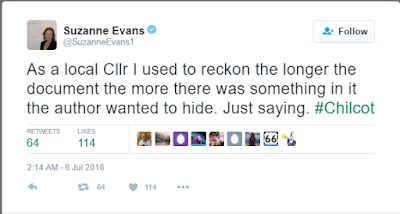 Chilcot is disappointing because it lays the blame on Blair for a lot of things but anyone knows it is more than one person that makes these decisions... What about the oil companies? Seems like a bit of a whitewash to me... Or even if it isn't... Chilcots mandate was not that impressive to begin with.

Of course the families of the soldiers of the Iraq war deserve recompense, and them getting money out of that slimy git is a very good thing in my view.

Sending soldiers to Iraq without the correct equipment was Blairs fault!
Posted by No name here. at 07:59