Following one of my recent posts about a facebook friend who 'unfriended' me... The same kind of thing has happened with the same kind of (casually left wing but supposedly apolitical) person... Just happened... here is the conversation:

This follows a conversation about the EU referendum where I hinted fairly early on I thought it would be leave (and also asking him if he wanted to bet at all in the biggest political betting event EVER!) and the odds on a leave bet were very good. For someone with an interest in gambling surely this is an interesting idea:

Me: Donald Trump for next POTUS 2/1

Him: To be honest I don't really care, looking at your feed you sound like a turd mate, need to just get out and enjoy life a bit and stop looking for hatred against races and religions, basically wake up and realise not every muslim is disgusting or every black man ignorant and maybe just enjoy life and travel and not be scared of the world.

Me: Lol, what specifically do you object to?

Him: I think you've just kind of lost the plot a bit. I don't think you're the same guy I knew quite a few years ago, your whole life seems to be dictated on matters that aren't going to change through a 15 person facebook feed.

Me: It's fair enough to ask what specifically you object to.

Him: Anyway, I'm just pissed off in general. I'll gather my thoughts and let you know properly. Right now just trying to fight this heat.

Me: I scrolled down a very long way and there is a Paul Joseph Watson video from three days ago... Only think I think it could be. Or perhaps you saw something a long way back and got annoyed about it and didn't say?

Message cannot be sent to this user... *blocked* then saw he wasn't on friends list anymore.

I don't think he will be getting back to me!

Just before I start on it... Donald will win POTUS... That was a good gamble that I tipped him. As was that on EU ref. One I got wrong recently was UKIP and Oldham... But, that was down to vote rigging.

Firstly, the most preposterous statement in all this is 'get out and travel'... For whatever reason, I have had absolutely no desire to travel even when I was the Joe he used to know, at no point in my life have I ever wanted to. Why would I live my life like he wants me to? The proposition is ridiculous.

What I'll handle in just a second is 'every black man ignorant'.

But first, he is dead right I am not the same guy he used to know. Things were going fine and I was living how I wanted to live which is a high contact with positive entities and a life lived kind of in spirit. I was a musician and a kind of channel. I did music, meditation, astrology etc. Things were painful, life is pain... But I had the thing that I most want... Purpose.

Then I met some people on my life path who screwed me over, who also believed and understood these invisible realities and twisted them against me in a way I fundamentally can't prove because... Like I said... They are invisible. There was deliberate sadism used against me at this time and not even a finger of effort towards undoing any of this damage.

But I will be able to prove them at some point in the future. This is what I am holding out for... And when people see the deliberate sadism that has happened here (with neg entity nudging) with any luck, there might be some sort of justice including jail time? But I'm not holding my breath on that one.

So for this reason I can't continue on that particular positive path because it makes me vulnerable to these people. I can't do music, meditation or astrology that really enlightens... So I focus on politics to bring about a change so that these issues can be addressed in some way... There really is no other choice accept being completely passive and doing neither because music is not an option anymore.
Anyway, every black man ignorant... I don't know what he means by this? The only posts I have made talking about black people were ones on black lives matter like this: 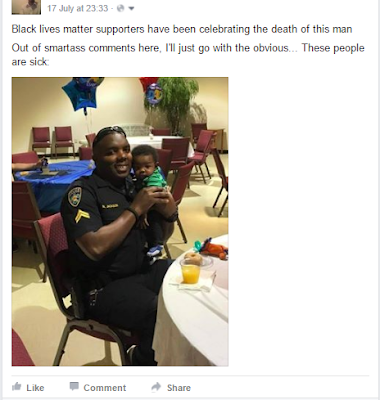 So is this a reason to accuse me of racism?

There was not even much against Muslims... this was the very worst two posts I could find, and one of them is factual. Most of my posts were non offensive jokes or posts on finance and politics (atm Erdogan not mentioning Islam), including mostly Jeremy Corbyn:

During the Nice attack (there were no other jokes like this, this was the worst): 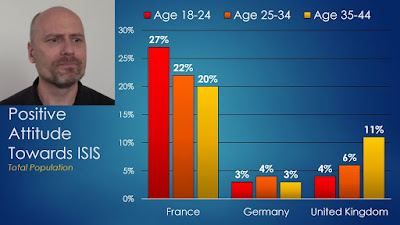 The second one is a fact and facts aren't racist. It came from a case study of 1000... Was an ICM poll. It is certainly not an outlier in putting forward the case a lot of Muslims hold these radical views. If you notice the United Kingdom is far lower so people there may not meet these Muslims so often... It's likely because France has a higher Muslim population and so there is more radicalisation.

It is perhaps worth mentioning that the only people I have ever met whom are definitely racist are this guys parents (who didn't want him marrying outside the culture... This guy and his brother lied to their parent about dating whites to avoid their anger!)... I hoped to bring that up if there was any ever public disagreement between us on this issue.

I have just got a book on bitcoin and WOW... WOW!!!! I don't see a reason to discuss specifics but it is so technologically sophisticated that David Wilcocks assertion that it came from positive ET's should be SELF EVIDENT! It definitely opposes the government and bitcoin would also have to put up with more professional attempt at takedowns than what is known publicly. This is very exciting. Bitcoin though are more than $1000 per coin so I don't know if I will be able to get any.

Also, perhaps if I got into bitcoin community and perhaps programming, I would meet others of like mind...

Back to Social Justice Warriors:

So this is the hitback... Exactly like the previous unfriend on facebook, while I was talking about things but could safely be considered irrelevant for lacking power (I.e. on the EU) then there is no problem. The second that the views I have appear to be more powerful... well that is not OK... And leftist hysteria follows.

Which is basically the attempt to apply soft power to bring other views into conformity with the leftist world view.

Woe betide the leaders, perched on their dizzy pinnacles of triumph if they cast away at the conference table what the soldiers had won on a hundred bloodsoaked battlefields. -Winston Churchill

And one more thing this facebook friend was wrong on:

Well, yes, actually; they are.