(Note, this one was reprinted on an old blog, so I have left in the first paragraph that partly addresses that community).


(Sorry I didn't edit this when I first put it up, it was unreadable. Just did so about three hours after putting it up.)

I wanted to write an article on this subject, mostly because I intuitively thought I should write this one here and it all seems to have come together. Logically, if I was making a story to justify the actions, I might say that this is an important world event and I would like to write about the metaphysics somewhere like here because it brings sense of such an event to a metaphysical community and has a larger 'outreach' (and to control the narrative away from repetitive doom laden ideas that spring up from somewhere, although I will be exploring dark ideas/ facts).

Today, November Friday the 13th France had a 'terrorist attack'. Anyone briefed on real politics knows that a lot of these are false flags, in fact, there are very few I know of that definitely are NOT false flags.

I will divide the reasons I think they have done this one into three:

1) Following on from the commentators: Benjamin Fulford, David and Corey.
2) Mundane politics.
3) Far out metaphysics

Then 4) Will be tying this into some things that I summise from what the positive ET's are up to, their strategies in bringing down the 'cabal'. With an emphasis on the ET's perspective rather than the more 'earth based' perspective.

This will possibly summarise astrological things as well. (Ended up not doing this.)

The story, in these alternative media (i.e. Fulford, Wilcock and Goode) is that the positive alliance, have completely cornered the cabal, and influential people in world politics whom are largely aligned with these were planning to meet up at the climate change conference in Paris on November 30th, to start hammering out deals as to how they want it all to go down. (I.e. Government of the future, disclosure etc.)

Reason #1: This is my first suspicion about why this happened. This will be used as an excuse for some countries not to attend this conference, which they think will slow down these plans.

An additional note in this Fulford article is the reference to 'Rothschild cartoons' in this, symbolising ahead of time what was going to happen.

An example of this practice of putting hints into films for metaphysical dark magick reasons has been stumbled on by the youtube video: Everything wrong with National Treasure Book of Secrets: https://www.youtube.com/watch?v=IwGPqLcz6wI, from the video:

This happened while the narrator of this video was reviewing an msn search page screenshotted: "That's strange, Benazir Bhutto was a popular search? Because she was assassinated in 2007. But this movie came out 6 days BEFORE her assassination. CONSPIRACY???? This may be the oddest thing I've ever noticed in a movie."

The National Treasure storyline was focused on the assassination of Abraham Lincoln, and the film talks a lot about assassination around the screenshot of this page. It seems to be programmed 'emotion' then directing the energy through the subliminal. As was done in the Rothschild cartoon, the factual, but still charged information was to do with the Egyptian plane crash, there was an emotional undertone to the whole thing easily missed, until now!

The simple political facts is that governments are closing their borders to the Middle Eastern mass migration, (Slovakia, Hungary, Czech Republic so far, Denmark and Sweden are flirting with the idea). France is probably THE most pro EU country, and the EU has a no- borders policy.

In effect, France could not close their borders without admitting their EU 'cult' was farcical, so needed an easy political get out clause.

No matter what else is going on in these events, there seems to be political reasons why these things are happening additionally to some of the informed media out there. For example the Tianjin explosions (a shipping port for exports) happened just as China devalued their currency (which would increase exports) and was crashing the American markets something chronic. Even if it was about sending an Electro Magnetic Pulse to the Chinese supercomputer, (as reported by Corey and Ben Fulford) it fit very nicely with the political narrative at the time.

This is either because these political aims are also important and kill two birds with one stone, or serve as a satisfaction of curiousity for those into the alternative but having not gone all the way into Extra Terrestrial info. etc. The latter reason sounds farcical but I see the same pattern in vote rigging, and other manipulations. There are false trails so that people give up when the real truth of the deception is put forward.

I have mentioned before how lightning striking the top of the One World Trade centre preceded by a few days the bursting of the bubble of the Dow in April, also there was another lightning strike occurence and one previously described by David Wilcock at these turning points.

Well, get a load of this, seems to me an attempt to undo the lightning strike 'magick': 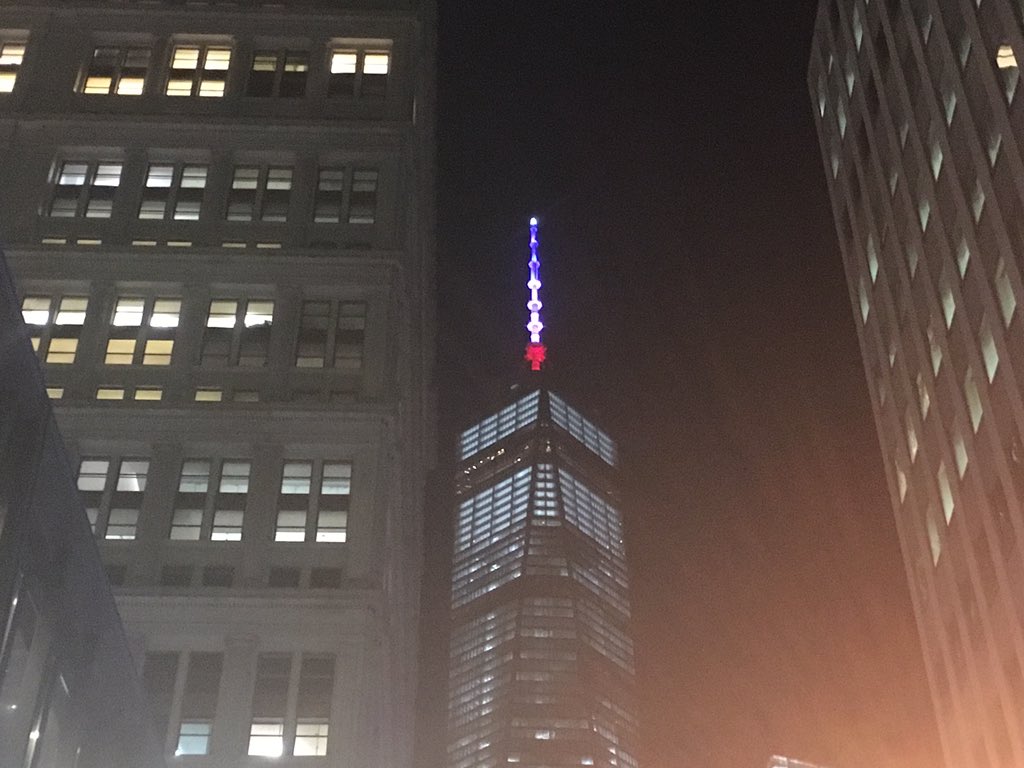 As I have summarised on my other blog, it seems unlikely to me, from a rational market based level, they will mathematically be able to get the markets back up to new highs.

The S&P (futures market that controls the Dow) was within one good rally away from new highs but started sliding again this week! The Dow was two or three days away from new highs, WAS. However, has slid 450 points the past two days!

I've mentioned this before, it comes down to a LoO quote and is quite esoteric.

One of the lines from the LoO from memory is that 'It is the nature of distortion that it has to be accentuated before it is healed'. Meaning, things have to get worse sometimes before they get better.

I.e. if someone has irrational anger over some social issue (lets call it racism). While it is running around in the person psyche poisoning everything but not being shown it will not be solved. But if things escalate and the person ends up getting in a fight with other races (for instance), it moves towards being solved.

There is also another part of the Law of One that explains if an emotion is taken to it's extreme it breaks apart and heals.

Of course the haphazard rules of third density might include death or STS manipulations that prevent anything from being solved. But if the environment was broadly STO then this principle would make sense and would in fact heal the problem that was being escalated. (Unity 100 used to say this sort of thing!)

That is what I think is happening here. The markets have had to grow more and more and more rigged to make up for the fact the economy is disintegrating (shown by real indicators like manufacturing, shipping, company profits, price of metals and commodities, deaths etc.)

So the system is turning in on itself, there is a limit to rigging. If you have a house you run by intimidation, stealing, and repressing everyone that brings up the problems, there are some things you can't fake, you cannot bribe people without real wealth.

I think this is going on on a global level. The positive beings are providing the catalyst to turn, not individual but the ENVIRONMENT positive. Rather like if the economy grows sour there will be rebels, as a small example of the rules that move things on the way to being solved, this is a natural by product of the environment, not an act of politics.

So probably, very often when individuals have said they were going to do MASS ARRESTS that we have heard of through Wilcock and Fulford and others, and it has not gone down, the positive entities know this, they just let the train carry on until it derails itself because that's what it has to do.

So, when something happens, i.e Chinese trying to derail disclosure, you can be sure that the positive ET's are playing the LONG GAME, and perhaps consider this energy as 'transcient' to the system fixing itself through the starving of the negative polarity of energy. Their energetic plans for disclosure carry on just batting problems away because it is a PROCESS. Not a 'revolution'.

And when it does derail itself, if it happens in the right way, the negative forces cannot blame anyone else but themselves. They would have scapegoats for any action committed against them as some sort of perversion of the 'defense' energy (we are all one, they have a right to it even if they are defending against someone bringing their karma). But they cannot blame anyone if the financial jiggery pokery they created turns in on them. They can do some damage but not as much as they might be allowed to if they were assaulted.

So the political games are tweaking against their political endeavors they have set themselves up to fail through lies. For instance, the drug trade in the Middle East disrupts finance, since there is a lack of liquidity (cash).

Without cash, the rich cannot offload their own toxic assets onto others to make others take the fall for their crap. So i) if the stocks go down they might be left with the debt (for once) and ii) If they can't take these risks, and possibly offload them onto others if it gets bad it's VERY bad for the stock market. In fact some market news I've been reading recently says this is exactly what is happening. (Signs of the drug money siezing up are quite common. For instance, the London housing bubble bursting).

Anyway, this article is not too much into finance, I have done others more specifically into it.

The point is, where this is the bad guys karma is that: THEY WERE THE ONES WHO ORIGINALLY MADE IT SO THESE FINANCIAL INSTRUMENTS HAD POWER OVER REAL WORLD THINGS... and now they cannot get rid of this power when it is held over them!

Now I call that some KARMA!