Day before the full moon.

So I felt an update was necessary, not because I'm burning with something to say, but just because... :).

The sun is beginning it's conjunction with Saturn. It is at 1deg and Saturn is at 6 Sagittarius, On November 30th they will both be conjunct at 7deg.

You may have felt it, I have felt it and it is reflected in daily events. The stock market is down yesterday and today and with events 'seeming' to inspire this feeling, it is like a 'clampdown' on something. The feeling is as though a bug was running about and was squashed under a brick. Those are your feelings.

Saturn is not like it's more ethereal outer planets. It is real, everyday problems getting in the way. (My Saturn return is basically starting soon. Woop de doo. It is the possible energy of a 'court case' type scenario!)

The New Moon of the 11th November started with a trine to Chiron. Chiron in Pisces when the sun has conjuncted it has had the same situation when I have been following it before. Two related things: Media corruption and Russia. Both times Russia was up to stuff and I was angry at MSM not telling me what was really going on.

So, perhaps this is what it is about. Wounds (Chiron) are partly created through the refusal to communicate in some way. Chiron I think is about where our 'paths' go off and we have to engage in other things. David Wilcock's Sun is conjunct the Piscean Chiron at the moment, and I tend to think that is a reflection of him being the one to reveal some of this secretive information. There is a positively polarised being next to the Chiron Sun making sure the secrecy isn't over the top and counterproductive.

That's what the news has been like lately, and it is partly why I haven't blogged. Unlike last month opposing Uranus, this month has had an abstract and obtuse feel about it, rather like Neptune. Paris attacks are not immediately obvious, the Middle East is a big load of mysteriousness, we hear something about it but I suppose time will only tell... What everyone is up to at the moment... I have no idea!

England will be in the bubble supporting game tomorrow with the Chancellors autumn statement. Therefore I do not feel optimistic if the FTSE tumbles at the moment, since it will surely rise after his measures.

If David Wilcocks article were to come out the same day. With the Chancellors statement and the full moon. It should all lead to a very conflicting energy!

The French attacks saved the markets due to the investment in weapons companies partially, which is interesting considering this chart: 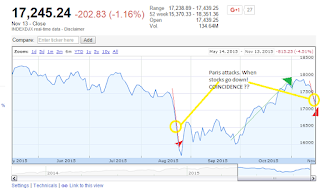 Ben Fulford talked about Rothschild having something to do with it and that makes sense.

However, the reasons for it, for today's Russia - Turkey dispute and what the French and UN are ACTUALLY UP TO, remain mysteriousness. My estimation is that as Saturn continues to move onto the exact Saturn Square Neptune, the tension of this will only increase. (Also, will become more and more 'strange'.)

This might be relevant it might not be. (I have grown tired of things 'blowing over'. No one is even talking about Paris anymore!) But Russia's plane was downed by Turkey on complaints of an airspace violation (conflicting reports where this was) and now Russia are responding to Turkey by directly highlighting their alliance with Da'esh.

This was very silly from Turkey from a mainstream perspective since diplomatic channels did remain open with Russia!

If this situation remains intractable, if it is re- hashed and escalates, it will start to wake your ordinary person up. It fits in well with my description of Saturn!

People in the West are not happy about it. No one doubts that Russia is a powerful world actor, that they are justified, and most probably know that the US and Turkey are taking the piss big time.

However, on top of this, on a basic animal level I can feel a sense of fear, when I'm on twitter and in the eerie quietness on the streets. For some reason, after the 'austerity', people are perhaps take things a little more seriously and they now know... At least a little more than they did with Da'esh being strewn all over the newspapers, (and... Iraq! With Jeremy Corbyn and trident perhaps as well has encouraged some thought)... What 'war' really means.
Posted by No name here. at 06:40