I suppose this blog is mostly focused on when things are going to change in the larger political sense, many groups of people believe this will happen fairly suddenly and will have pervasive effects that will impact us all.

So, according to the news on the EU front, it's not good. Hungary is going to have a vote on whether to accept the "refugees", which will not be accepted. Norway is drafting emergency legislation to close the border if need be. Czecks and the Dutch are having surveys to say they don't like the EU and are considering their own one if the UK is successful in leaving and Belgium has simply abandoned free movement. Putting armed guards at the borders to stop undesirables entering.

The EU originally pushed through the measures for migrant quotas by a method known as Qualified Majority Voting. Which means that the big states have more voting power than the smaller ones. Essentially they just 'told' the smaller states to co- operate, and now, inevitably, they are not!

The finance world is seeing a bit of strangeness, today, to the utter amazement of some commentators, the Dow rallied at almost the last moment from being about two hundred and fifty points down to fifty up! To quote zerohedge: Worst sales data in 2 years, worst services economy in 3 years and an ongoing build up in crude.


It makes a person wonder, at what point can the lie end? If you have a stock market but in real terms trade has stopped (Baltic Dry Index) sales, crude etc. has all stopped working. How long can traders carry on fixing the market?

Obviously, when the stock market was created there was not enough safeguards put in place to stop this kind of thing. So lets work through it logically; They can't overproduce money because that produces inflation, what inflation would mean in the practical sense is people have more money to spend but there are no more resources so prices go up.

Perhaps they can work it so only the very rich get money and do not spend it. That though, is not a workable economy, because if the rich have money but there is no demand for items (because everyone else is poor) fewer people have jobs, or ability to give their labour because of overstretched services, and things stop getting produced. That means even if you have money you cannot buy what you need.

Let's say, as seems likely, that you cannot buy some goods from overseas for your fiat currency, you need to give them real things... We can see the problem here, eventually most supermarkets will run out of food, most car manufacturers will not be able to produce, etc.

But this seems a long way off, I cannot see that there is an end to such a fiat money system.

However, in this system you cannot write debt off. If you write debt off to one person you have to write it off for another and sooner or later, no one will be under your power anymore. Plus people who are attached to that debt (via bonds etc.) will lose money, and be angry.

Problems of this sort are a little easier to find. Where people not paying their debt is the source of the problem. A hedge fund called Third Avenue recently attempted to liquidate, but since they had overvalued their bonds, decided to push it on a bit, hoping the market would rally and they'd be able to sell the bonds they had on their books for the price they are marked at (this means, if the bonds fall in price and don't go back up, thousands, millions of people are going to lose a lot of money, perhaps all of it.)

Although not strictly related to debt, another problem is that some of the Japanese have been trading on margin (i.e. asset backed). These people have lost a lot of money recently. Another problem, as it relates back to the EU is that Italy is almost in the same place as Greece was, but if Italy defaults the whole EU will be badly shaken, it is it's fourth largest economy.

It seems to me that if the traders of the Dow are so determined to avoid reality, and avoid any correction, that when it comes it will be more devastating than it would otherwise be. But really, if a credit fund can, instead of liquidating, put off it's closing date with claptrap and simply liquidate the bonds at a later time, then things will continue as they were before. I cannot, in my mind, imagine what event would be strong enough to make these people see any sort of reality.

However, if there was a time when they were to, or be forced to, it seems the correction of the Dow would be incredibly quick. The biggest drop of the Dow has been 6-7%, this was during 2008 which was not as bad as the market conditions we now face. 7% of the current market would be 1153. If that happened during one day there would be a lot of shock, these traders that have been moronically trading would be forced to face reality.

The Chinese have been saying that they will be disattaching their currency peg away from the dollar, which could completely destroy the US economy in days. But rather like all the times the US military was going to arrest the cabal personnel in America, this one is doubtful until they are somehow pushed.

If you have been following this blog for any length of time you will know I sometimes follow what I consider celestial signals like lightning strikes, and we have another:

This is from an Express article explaining how a journalist climbed a tower to perfectly capture a picture of a lightning strike, hitting the tallest building in Dubai, the Burj Khalifa (Could not find a copyright and this blog is pretty much unheard of): 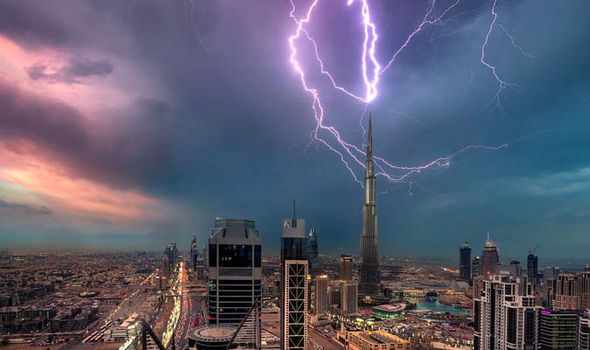 This is a pretty fantastic photograph.

Dubai is known as a big part of the effort to smuggle gold to China. What this I think means is that if China does not start sorting out markets soon, it will start to suffer the same fate, i.e. things will start to go wrong.

... and with some of (not all of) these 'good guys', I would bet on them being able to get on with it if it is for self preservation, rather than through any sort of altruism.

Zerohedge: Something Unexpected Happened When A Distressed Credit Fund Tried To Liquidate

Zerohedge: How Italy Will Fail And Drag Down The European Project -- (Guest)

Benjamin Fulford: Did a Chinese banker just announce the biggest event in human history
Posted by No name here. at 19:22