Astrology of America's POTUS election and some thoughts.

Previously I might have said that there is nothing in the US election date astrology chart of November 8th.

Personally I thought it looks more like Hillary is going to win. Although in my understanding it is not for astrology to tell results like that which are the product of free will. The astrology sort of sets the stage but people still make decisions within that.

But this conclusion is a little premature. I realise that to understand the event you need to run up the days before it. 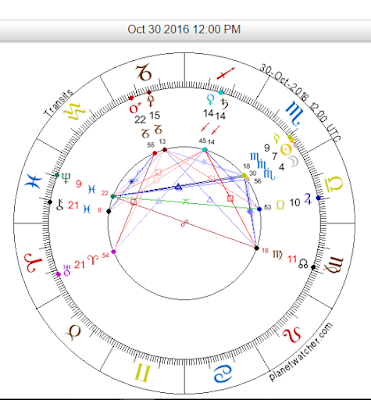 I had not noticed this is the new moon date until I posted this chart. This is BIG. BIG astrologically.

The reason things like this are coming up at the moment all over the Alt Right is the Venus and Saturn approaching conjunction with a square to the North Node... I.e. thoughts of our civilisations future!

But the conjunction of Saturn and Venus exactly over my native Saturn, to me, represent the judgement, the court case on FEMINISM. One of the patterns from third wave feminism being that women can make accusations without recrimination. This form of social control also being reflected from within mainstream media organisations.

Sun in Scorpio, which is all about some darker psychological motivations (this is also over my natal Pluto.) Conjunct Mercury may mean the media and such matters. Trine Neptune which can either mean social justiceness or information that essentially leads back to extra terrestrial issues. Like hacking for instance.

Anger of the establishment (Capricorn) directed at Uranian themes, of science and revolution.

The opening square of this incredible new moon is with the moon over Aquarius with Mars just heading into there also on November 7th. Full moon seems a bit more dull on November 14th. With the trusty Sun approaching my eighth house. November 21st closing square looks like the media will start to get some karma, with also Neptunian and collective future themes whatever they happen to be reaching a slow crescendo (long term trend). New moon on November 29th and there is still tension with this Neptunian theme.

Taken together, I wonder if this means Trump will win but the Social Justice Warrior problem, or something else of this Neptunian variety, is going to cause continual problems. The media getting some karma though would be good!

This new moon on November 29th will then be getting ready for our Italian referendum on December 4th!

One more thing. Two things I have learned from reading about World War 2: The Nazi's did not give up because they had convinced themselves of the rather stupid idea that there was a secret death ray that would save them. This is perhaps some of the thinking behind the 'scorched earth policy' the America establishment is pursuing.

Secondly, we seem to be following a pattern similar in some very rudimentary senses. Germany/ Merkel is yet again the villain of the EU, The British were the first in a basic sense to oppose the globalists with Brexit, but the Americans now involved will likely be the bigger influence over the charge against globalism. The British did not interfer with (though they did not support) the Americans successful, and strategically correct, desire to invade Germany and German territory towards the end of the war. Although technically the whole of Europe is involved this time not just factional countries.

This will be a very interesting few days for my personal chart but as I said... It is free will partly, what we make of it!

Also, I just wanted to say that this infowars interview with Nigel Farage is very good, in it Nigel Farage says the real thing that puts me in tune here. That Brexit is important because big corporates, such as pharmaceutical companies, are using the globalist model in order to stop all free market competition, by creating their own laws.

Also, it seems to me on a very basic level that there is a collective calmness at the moment because the liberals believe they are winning. That is just as it is, no comment really. We will see!
Posted by No name here. at 07:09