The situation in Stoke!

So many things are going on.

On the by- election in Stoke:

Huffington post: Nigel Farage Refuses To Campaign Anymore For Paul Nuttall In Stoke Amid Splits At Top Of Ukip

There is a problem in UKIP. Nuttalls election as leader was not an election but a coronation in which all the inside people in UKIP voted for the 'safe' candidate and made sure to give the UKIP leadership election the minimum amount of attention and no debates, because they didn't want the favourite of the membership that were paying attention and in the Farage/ Kassam camp, to vote for John Rees Evans.

This has left some dangerous people in the party. Lisa Duffy, Suzanne Evans and Douglas Carswell who all have questionable loyalties and shy away from rocking the boat. Suzanne Evans is a full on Social Justice Warrior.

This will eat UKIP eventually. Either Arron Banks will directly oppose them as the Duffy camp gains more power, or they will protest something and since they have won before, probably win again. A fight is coming there.

English politics is safe at the moment there is no one rocking the boat. Theresa May's loyalties are not clear although the ostracism of Farage hints the current Tory government is anti Brexit. The only person I am convinced actually does want Brexit is Corbyn. 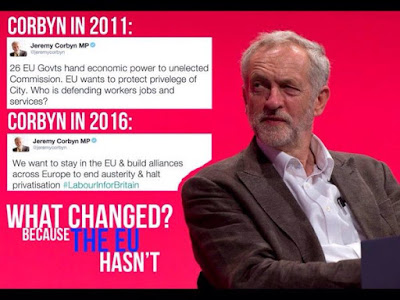 So let's look at this Stoke by- election. It happened because a very committed, in the know, full on neo liberal/ Blairite Tristram Hunt left his post. The new guy applying for the post is called Andrew Snell, (which is a better supervillain name than any Bond villain I know). Andrew has not been doing well in Stoke. Even though opposing research on Paul Nuttall has lead him to go to ground, Andrew himself seems to have been trying very hard to sabotage his own chances.

He could genuinely be that awful. Like Alex Jones says the establishment demons are not efficient, they are a lot of the time lazy and obsessed with their own mansions and their enemies. But after a prolonged campaign of telling Paul Nuttall that he is not from Stoke, Andrew answers a tweet: "I wouldn't know, I'm not from Stoke."

If Andrew loses it will reflect on Corbyn, even though Stoke will have voted against the pro EU candidate who is further away from Corbyn than UKIP is; and Corbyn is using his best headmasters voice to tell the Labour MP's not to be overtly pro EU, it will still fall on Corbyn. There have been rumours Corbyn is testing new potential leaders in case he does bad on February 23rd (translation, in case he does bad in Stoke!)

What do the Remainer Blairites have to gain in Stoke? Well, if Snell wins they have kept down UKIP and kept Nuttall out of the house of Commons (I think the opposition would be far more hysterical and genuine if Farage was about to win Stoke personally!) If Snell loses however, they potentially have the opportunity to gain the whole Labour party to the remainers cause and side with pro EU Tories, SNP and Lib Dems and vote Brexit down at every opportunity!