Political strategy in the Brighton and Hove constituency.

In a previous post of mine here entitled 'How will the leftist paradigm in Brighton and Hove end', I bemoaned how there was a sort of "feeling" to Brighton and Hove that was only occasionally there. But a liberalism that sort of encourages a kind of sexual promiscuity that does not seem right.

I brought up a few parties and things people had told me and, in that article, I forgot to mention that recently the only store selling DVD's in the shopping centre (and by extension the only one in Brighton that I know of).. Shut down and was replaced by... Wait for it... A Victoria's Secret! This is quite a big store.

This reminds me, quite randomly of this kind of article. This tendency towards liberalism and open relationship (both linked as I have explained before) is something we are knee deep in as a society:

Daily Mail: Could sex with a stranger save your marriage? Expert who throws swingers parties insists EVERY couple would be happier if they abandoned monogamy
After I wrote my article, which was very defeatist where I thought Peter Kyle (Labour MP for Hove) was definitely going to win, I also talked about a later Daily Express article that named Remainer constituencies under threat and Peter Kyle's was one of them. He only has a small majority.

Which brings me to what I was going to talk about. Luckily, the strategy of the left/ liberals in Brighton and Hove is something to write home about... For all the wrong reasons:

In Hove, the strong remainer Peter Kyle is facing: Green, Lib Dem and Conservative... No UKIP.
In Brighton, the Green party Caroline Lucas is facing: Labour, Conservative and UKIP. 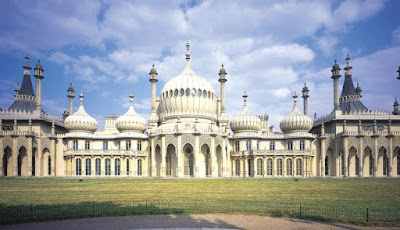 But, going to Brighton first:

The reason for this is that the Green party have pushed this left wing coalition thing and the greens have stood down in many constituencies, and Labour have to repay this by stepping down in Brighton. The strategy is also perhaps influenced by the fact I heard that Greens overspent in the Brighton constituency which they are more careful not to do now.

Labour did not want to step down in Brighton but they also did want to. So to save face they have let a 20 year old student run. Which clearly is disrespectful.

The left seems to have this strange idea that they own groups of people. I can imagine it working if the hard left Greens cannot vote they will vote for someone that is centre left. But I do not think it works the other way around and Labour does represent the centre left regardless of Corbyn. Many Labour voters are real world people that are not hard left, they are closer to Tories than hard left. So when they are given the choice of Greens or Conservatives, they will go Conservatives... So put simply, Caroline needed the Labour vote to absorb the floating centre ground voters that might vote Conservatives.

One of Labours 'golden children' Peter Kyle. Who currently has Eddie Izzard campaigning with him: 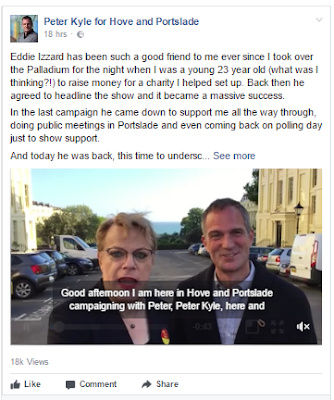 Luckily they're nowhere near me!

Peter Kyle is a bit more capable than your average leftist politician. He is not as slimy as Tristan Hunt or Peters close friend Chuka Umunna; he is not as stupid as much of the current Labour cabinet and he is not as obviously hypocritical as the Lib Dems. He is gay in a constituency neighboring the gay capital of Europe.

But, if I was the remainer globalist force behind him (unless I have something wrong here), I would not put Peter Kyle up against the Lib Dems and the Greens! Seriously the Greens do not matter but the Liberal Democrat and Labour vote are likely to be split in this election, it was a high remain vote. Hove has previously been a Conservative constituency but this Conservative candidate is the polar opposite of Mike Weatherly.

Mike Weatherly fell out in a bad way with the left including getting physically attacked when going to University and getting death threats for his policies of not allowing squatters to sleep in empty houses. This apparently caused some homeless people to die in the winter although this was not conclusively proved. The new Conservative candidate works with a homeless shelter!

My point here is that the lefts strategy in Brighton and Hove has been pretty bad. Possibly it is not as bad as it seems and there is a purpose to this, for instance, we have yet to see the Conservative manifesto and I'm getting tetchy of their likelihood of pushing through a 'Brexit-in-Name-Only'. Or perhaps it is simply that the left have allowed pure emotion to take precedence over strategy.