So, before I move onto other events, take a look at this:

At first I thought I had said some things on #FarageOnLBC and they twitterati had not liked it, however, if you look at the Sunday 14th May there, well, it was a Sunday!!! No #FarageOnLBC on that day. I can probably find out what started up that problem if I scroll back to May 14th and May 13th when whatever I tweeted to get me blocked was probably put up there.

Same sort of censorship is happening on twitter on a larger level. Although this was not my experience, plenty of people were coming through my twitter, there is a reason @JediEconomist said this: 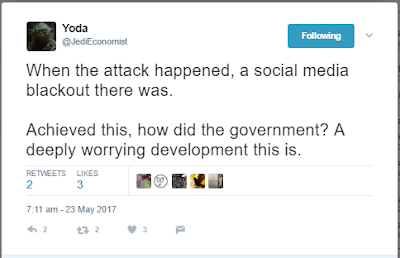 I am too cynical to even spend any time wondering about the Islamic side of this, although that is of course relevant, I'm going straight to the idea that it is a false flag and that it has a political agenda.

I have previously charted how terror attacks happen at points of discomfort in the market, when it looks like it might tumble. Why this is I have no idea... Perhaps there is a patriotic mentality that people should buy in order to not make it look like the terrorists have won, because how awful it might be considered to be if there was a terrorist attack then an immediate fall of the stock market.

Maybe it is because the forces behind these attacks are actively intimidating the stock market buyers... "Bet against us and you might just find yourself a little Allahu Ackbar" or maybe it is because it is a black magick ritual and people just buy at that point for their own assumed reasons.

Whatever the reason, it is worth considering when terror attacks happen but at the moment I cannot see this pattern in the market. The Dow futures are down and the Dollar futures are down. This pattern we are seeing in markets of a plunging dollar, rising cryptocurrency has not changed, although the stock market is now starting to be pulled into conformity with the dollar. 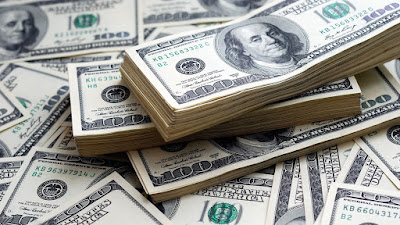 It is highly likely that something is happening!

... and what about politically? I cannot see any potential advantage of this. Perhaps the idea that it will help Theresa May, because Corbyn is generally looked upon as pro Muslim and a terrrorist sympathiser. Campaigning has stopped! Perhaps it is meant more widely to intimidate though! Or it could bring all the UKIP supporters out of supporting the Conservatives, splitting the right so the left can take victory!

Two things. Firstly, I am wondering about twitter, surely this kind of thing deserves a response? However, I did not like Gab much, I suppose I could re- try! Often I wonder at the celebrities on there, the new media right wing personalities and wonder how or why they put up with twitter. 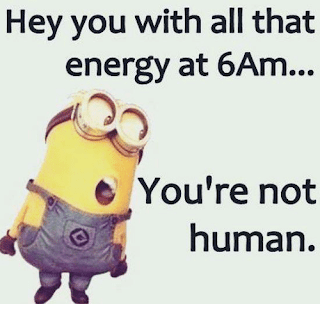 The tiredness is pretty irritating but I am OK to go to work. It surprises me how the fight or flight adrenaline instinct keeps me feeling OK at work, although after a week of bad sleep by Friday I am a little strange sometimes.
Posted by No name here. at 23:39