Some astrology charts of liberals.

So, following on from yesterday then let's take a look at some liberals charts:


Starting off with this guy, I can't remember what it was he said, perhaps something anti Trump, but it lead me to throw out the book of his I was reading: 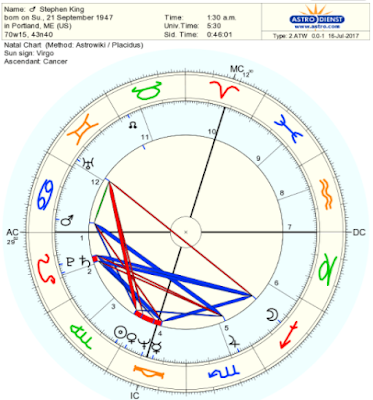 It seems to me that Uranus is the free market right planet. It is prominent for Nigel Farage and VERY much so for Donald Trump. It is the sciency planet that likes to take in a lot of information and organically move it all around. Music, astrology itself, UFO technology etc.

When reading Stephen King books I have found an annoying sense that there are no rules. A negative being swans around with no limit on their power and they rarely seem to meet others or a like negative mind with a similar amount of power. The thing that would put those sorts of rules in is Uranus, and here Mr King has it squared and no trines to it.

Which means that there is a lot that he can do anyway. Pluto conjunct Moon, Neptune - Pluto sextile, Neptune - Venus etc. Which might characterise a negative being but he has to put effort in to give these stories structure in the deeper sense and metaphysical rules. Put simply. Stephen King can ignore the Uranus realm by being lazy! His energy system does not insist he uses the capacity in his writing or life, so we have our first liberal motivation... Laziness!


Many of these charts don't say anything in particular, let's start here: 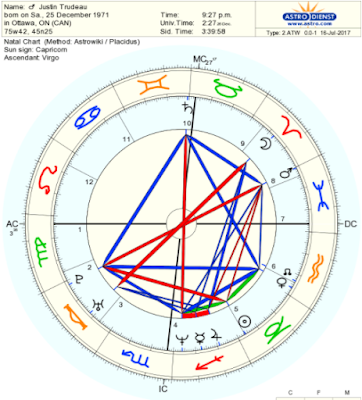 Justin Trudeau. Here we see a similar motivation. Justin's Moon and Uranus are opposing each other. So he has the option of going with what emotionally feels easy or figuring out what is legitimately fair. He has a strongly placed Saturn that from my understanding would be able to force out the collective planets and his Pluto Mars 8th house opposition would allow deceptive agendas to grow under his consciousness. 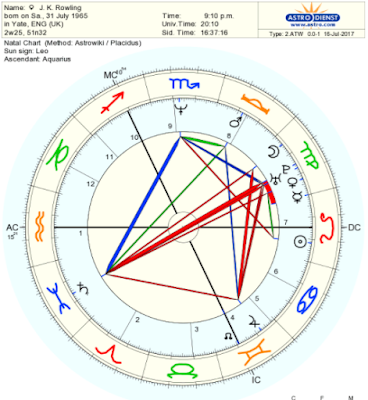 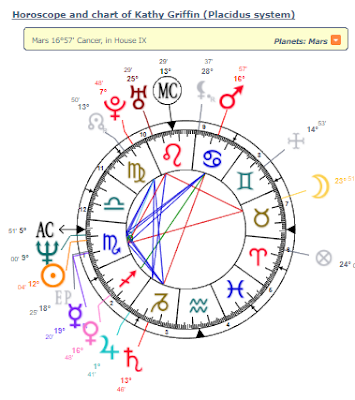 It's strange Kathy looks and acts similar to a Scorpio acquaintance.

J.K.Rowling has that same Saturn, very prominent. She also has a Uranus Pluto exact conjunction and a packed seventh house. Peer pressure will definitely get to her and she will likely come to the conclusion that a re- rise of the Nazi's is a real possibility!

Kathy with that Scorpio ascendant, Sun and Neptune, will have a thought process that is mysterious even to her. We still see that Saturn poking out again.

This last one here has no astro.com profile because the guy himself does not like or believe in astrology. This perhaps makes people think they should not look at his chart or worry that he is particularly bothered about giving a correct birth time...

I would note that it is likely a leftist would not believe in astrology because astrology's fundamental wisdom is that people are different. So for a leftist that wants to believe that everything is environment driven that wisdom has to be avoided!: 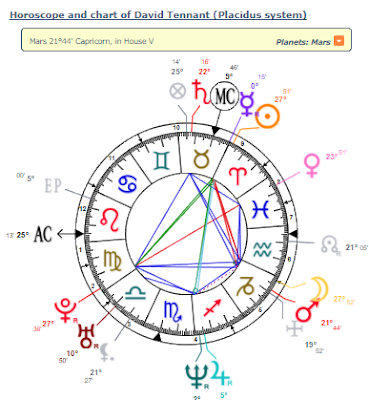 There is absolutely nothing in this chart that I can see that would incline someone left. Quite the contrary in fact.

I don't know about you but I am getting pretty sick of liberals on social media. They will usually get angry at me for very little. A statement perhaps that I don't agree with leftism. Then they will start doing passive aggressive things. When I POLITELY respond to them they start getting angry and swearing... "Fuck off and read the Daily Fail" sort of thing.

Then, to respond to this anger, with the energy that I might use to push a cat off the table, I then go through a long post with article references and a detailed response.

NEVER EVER do they respond to even one single point. ALMOST ALWAYS do they come back a few responses later and answer someone else and me as well with something that I have already answered in the detailed response. Such as I might say the BBC are biased and have stacked the question time panel, they will come back and say Leavers want to suffocate free speech and can't stand remainers talking... Ignoring my point on the Question Time Panel.

Vox Day wrote a book on them, and he said part of their psychology is that they don't care about the rational argument. They only want to put you down in the moment! Which is why they lie as well. They just want you to feel bad!
Posted by No name here. at 23:51