Courtney Stoddens chart/ The myth of the sociopath/ Approaching future.

I notice, that during political conversations if 'sex' is at al mentioned it kind of cheapens the conversation a lot of the time. Because sex is so basic, animalistic and it does not take in the interesting realities of power plays (women teasing has ended it's life I think!) I notice this firstly with my diary where a knock on effect from my most important project at the moment, my bloodsugars, has lead me to write a few times in there 'I'm thinking about sex' etc. This has lead from a very interesting document that I was first writing, littered with conversations about things that might be in Benjamin Fulfords blog, down to a kind of boring slightly pathetic document!

Such is the way, talk of sex cheapens things.


Yesterday, I think I made some fairly on point notes about the power of feminine charm on the consciousness of society. However, I notice that even though I first looked at that girl from overpowering attraction, once I get absorbed in someones chart that 'lower' emotion starts to become more intelligent and I habitually think of such a person from the way THEY experience reality. This post on Courtney is from a woman, i.e. one of those beings not troubled by sex when looking at another woman:


We can make a case for her liking older men with the Sun opposing Saturn, but she needs to own her Saturn and get to know her Virgo Sun. All that showcasing of her body won’t give the Virgo what she really needs…. To be respected for her MIND. And, if her Moon is squared by Saturn natally, she may be trying to stave off depression by getting attention in a way that is actually quite undermining. 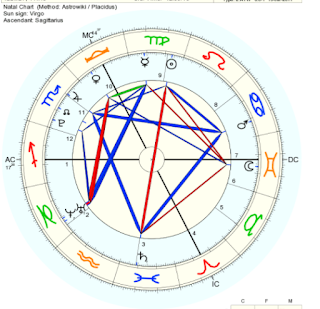 The grand water trine! That is partly where all the sexuality is coming from! This girl is probably pretty intense one on one!

The point on feminism... While feminism is in my view a deeply destructive ideology closely related to globalism (although whether it did so before it was infiltrated by the CIA and redirected by Gloria Steinman is not clear!). Feminism as Courtney sometimes uses it, is to defend herself dressing pleasingly, against the creepy angry public; the public that is highly influenced by body positivity movements... I.e. if you are a fat thing then you should be proud of your body, but if you are attractive you should be ashamed! Socialism in terms of sexual energy! This is why deception of language can be so confusing!

I very much like women dressing pleasingly, I can control myself, and when they do not because of "slut shaming" then... That is a shame! (I do separately define "pleasingly" and "vulgarly")!

The myth of the sociopath:

Also the mythology of Ted Bundy confuses the interpretation of his actions. In his last interview it is known that he started off taking responsibility for his crimes (which is just a little commendable) but by the end of the interview to satisfy the Christian guy counselling him he blamed all his crime on pornography. (Of which there was no evidence. There was no violent pornography at his home. There were cheerleader magazines for twelve year old girls).

Perhaps he was just too weak to stand his ground? I seriously don't take all these statements of him being a master manipulator.

Then, if you look at this one, I don't know whether this woman would be considered a sociopath but psychological traits that every day people experience are explained in the psychology of killers:


There is an ebb and flow that I feel when looking at the world, especially when looking at astrology also. Rather like 'it is always darkest before the dawn'... Another obvious thing will be that before a change things will seem very stagnant... Because the forces resisting change will give out all at once and will effectively stop any change happening until they are overpowered. It's like a tide struggling against a damn.

When the next change happens after all this stagnation... It will be one that impacts liberals I think. A strike! A moment where their argument is obviously lost... That's just how it feels!
Posted by No name here. at 11:24