Hmm, probably what might be described as an "odds and ends" post again today, although, I will be doing a bit of a political summary at the end, and I have had a discovery on my own astrology I consider quite profound!

Firstly, just some musing on astrology. I've been wondering about how different planets work for women, gender and it's relation to Mars and Venus is not quite clear yet (and if I do again see my sister on a day where I seem to be represented by a Venus transit I will definitely be going against the idea Venus definitely means women).


However, two interesting women I have found recently, one has a full astrology charts; this is Kylie Jenner, even though I have chosen this picture for it's aesthetically pleasing nature, it looks to me like most of Kylie's seem to be direct in this way (Kylie has chosen with her life to run a clothing store of revealing clothes for women):

I have casually wondered recently how many of my readers are women, I have unconsciously assume that the readers are men but I suppose that may very well be incorrect. Astrology and politics are hardly exclusively male subjects. I also got a bit of a drop in readers when I put on my twitter my blog with a revealing picture. 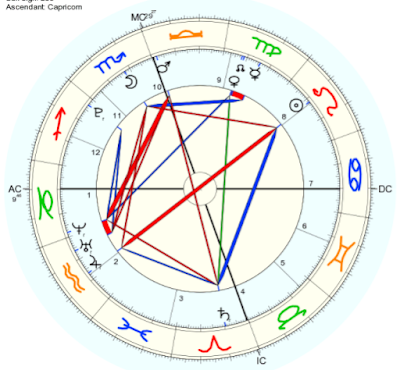 So, this is interesting, although Kylie has many things emphasizing sexuality as shown by Venus - North Node, Mercury, and the Sun itself in the eighth house. Leo's are also fairly direct.

However, the thing on the MC, the energy that might come through in something like a photo is... MARS. I am sure there are some people that might see Kylie's life and say that the involvement with sexually alluring and celebrity lifestyle has attracted men in relation to her career but that is a cheap shot, encouraged by the gynocentrism of astrology. Mars is her provocative instinct in my view. Mars in this manifestation has nothing to do with men except indirectly.

This chart interestingly has no intercepted signs... But I digress.

This is the other interesting one: 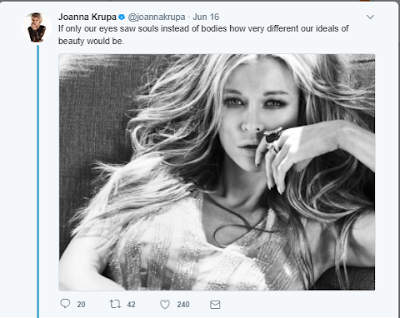 ... I disagree! Physical beauty is an indication of fitness to mate, if people could all see auras for instance, that instinct would remain.

However, what will be interesting is when health is improved on a mass scale... Apparently body modification is very easy from the perspective of the secret space program. Although, I do wonder if that's the case will people all aspire to the same cardboard cut out sort of person and hence, the difference in humanity would be eliminated? A thousand men health and Marie Clare models?

The reason I thought Joanna Krupa was interesting is that when I saw her images on 'the Express' my mind went straight to my bizarre fantasy (I figure people all have something). The fact that it worked out in my mind with this girl and not with others who are less interesting people. I wonder if there is a connection!? It sounds strange but I have had provable experiences of picking up details about people in ways as abstract as this so I pay attention to these things.


This insight is a MEGA INSIGHT!

I went back over my astrology while looking at someone else. Previously, in this incorrect post, [link] I stated that I was able to get work when the planets such as Jupiter went into my sixth house.

This... is INCORRECT.! I mistakenly had that thought a while back but the planet was in the wrong sign, not on my fifth house cusp but in the intercepted sign within my sixth house!

HOWEVER, and this is absolutely amazing! My Saturn return was EXACT IN THE MONTH I STARTED WORK. This is amazing. What this means is that the reason I have got a job in my mind has changed... To a far more mundane down to earth explanation.

This is the explanation... Saturn going through my eighth and ninth houses has lead to me having the discipline and correct ideas to find work

This, is no better than what you could get from the real world which is EXACTLY WHAT ASTROLOGY IS WHEN IT'S DONE CORRECTLY (in my view).

It also means that the tendency will stay with me because Saturn return changes your actual Saturn! I do feel in general, better,  grounded, happier in some difficult to describe way, since I have been working.

Saturn as I have said before is the planet that is used to enforce the 'postage stamp consensus' and is the big thing. I might conclude that when the postage stamp consensus (i.e. government tyranny) changes, then the disciplines I learned to get a job might come under new light. But lets not draw any conclusions yet!


Firstly, this amazingly interesting article that shows some of what I have been thinking about films:

This... Explains why Hollywood is so crap. Basically some humourless military folks remove interesting character revealing lines in these films. Hollywood becoming a vacuous soulless piece of crap is down to these guys. It is probably happening in some way in other films as well with other government departments or through a group of corporations and those providing something.

Also, a fightback is staring in Italy... A lot of interesting things seem to be happening in Italy... Protests against vaccines, politicians going more Eurosceptic, mass, mass, mass migration to Italy and taxpayer funded bailouts of failing banks!:

Two more things. A ceasefire agreement between Russia and the United States in Syria meaning aid can get to the people of Syria. Food, medicine etc. This is very good.

Russia and the US working together on good speaking terms is also very good.

The UK agreeing trade deals with China, Japan and the USA is very good as well! Things are looking up in politics.
Posted by No name here. at 10:45