Wow, well good news for me is my brain is working like it should. After alcohol has slowed it down briefly.

Reflecting on it, when I was in the midst of this, because I might find pleasure in drinking alcohol (I don't actually) I would then be prioritising that pleasure while the amount of people suffering because of political dysfunction is immense. I am not sure that this blog helps at that, in fact it is pretty certain it does not make a huge dent, however, I might make a miniscule but still significant dent when combined with also commenting on chat boards and general comment pages. Some peoples thoughts might be changed, some people will feel more supported, or less alone.

As a number if we were to count the amount of suffering happening. So tiredness might be 1-5 points, and equivalent points which I won't estimate for rape, murder, disappearance of a child, medical conditions, poverty etc. this figure would be huge and it will only get better when the 'deep state' goes to the slammer.

I have been wondering about karma as well. Surely karma is related to people, so if you shoot someone emotions caused in others of justice and revenge are your karma. If karma was going to someone who held back cures for my diabetes, it is unlikely that my specific discomfort would be represented. It would be likely that their collected karma may put them on death row anyway, and so it would not have the one - to - one eye - for - an - eye like impact.


The populist right and "Alliance" behind it seems to be winning the culture war. Firstly we have this J.K.Rowling situation. Which is quite amazing really. I have always noted that on twitter there is no penalty for lying, if you want to say the sky is always green and stick by that essentially no one can actually make you say otherwise. There is no referee that is going to say that you are refusing to look into objective and picture evidence, therefore your argument is not correct and there is a consequence for that, such as losing some sort of status.

The liberal left are fast learning though, that the populist right is trying to visit a consequence upon them. A small example might be twitter losing out on so much revenue because it keeps arbitrarily banning conservatives, or Macy's having to close stores (I think it was Macy's) after stopping selling Trump clothing for ideological reasons.

J.K.Rowling has openly lied and not retracted that, she clearly thinks that she can behave as though a loser SJW out in cyberspace that has no consequences for telling those sorts of lies. But the world is really pressuring her. The left are arrogantly refusing to admit they are wrong when shows the evidence. It was always going to get to this place.


Zerohedge: Even The Washington Post Admits "The Quest To Prove Russian Collusion Is Crumbling"

... and finally, much to his credit I think the main guy from the Young Turks called Cenk participated in a debate, I say much to his credit because at least he is debating. This suggests to me that he is not a real globalist but a misguided leftist. He recognises that free speech and debate is worth having. However, he was absolutely whopped apparently. He started calling the audience uneducated and came out with statements such as "increasing the top rate of tax to 91% will not decrease growth".

But if the Russia stuff is being closed by the Democrats, we are starting to see, in my view, how these eclipses might be being expressed. This was a long term emotional trend.

Jessica here mentions three predictions: A coverup in relation to a health scandal and Charlie Gard certainly qualifies. A resurgence in news on Diana princess of Wales, Daily Mail yesterday: 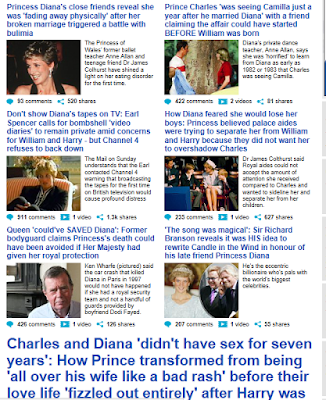 ... and one I was sure was because of her liberal leaning, the 2016 November US Presidential election.

We have now seen though that rather than letting this die Trump has turned the tables and claimed Russia helped Hillary with the election, so this has come up again!

Likely he is targeting the Russian deep state because Putin, the one that identified himself as Cabal by signing the climate change accords, has refused to help Trump with human trafficking!

North Korea is big as well, every day there is something (haven't had time to catch todays though, there was another one today):

Daily Express: BREAKING: 'They do NOTHING for us' Trump threatens China for inactivity over North Korea

Zerohedge: "Time Is Running Out" - China Is Planning For A Crisis Along North Korean Border


So as I summarised in relation to Ben Fulford here [link] this one appears to be happening!
Also, here's another prediction from Jessica, she thinks, and I doubt it but she's the one who's accurately predicting all these things, she thinks there will be movement on North Korea on August 3rd and 4th! Although this is perhaps saying something not quite so direct upon looking at it again!:
Jessica Adams: Astrological Dramas August 3rd-4th