Even though very little has changed in the grand scheme of things:

Zerohedge: US Urges All Nationals In North Korea To "Depart Immediately", Bans Tourists From Visiting

and this from yesterday:

Daily Express: North Korea ‘planning another ballistic missile launch’ amid rising tensions with the US


When asked about whether the US would launch a pre–emptive military strike against the hermit kingdom, Mr Selva said: "I think we have to entertain that potential option. That would be a policy choice by the President of the United States to execute or not execute that option."

So, backing up Ben's post here [link] it looks like this is actually going to happen! This is how the Khazarian mob is going to be flushed out!

On the personal level things have changed a lot today... I have finally been able to reduce a type of insulin I use while making sure to do bloodsugars very frequently. As a result, I am really emotional! It's getting silly! I will get hold of myself momentarily and this will very likely in the long term lead to me both sleeping better and exercising easier. Also, in general I seem to be feeling less stress.

Another thing that happened today was that I was messaged by a close friend that I have been a little worried about. A liberal who, in order to remain social with others drinks a lot of alcohol! There didn't seem to be hope from what I could see of him... He has come up with the perfect solution within his belief system... He's going vegan! This is good!


Yesterday, I was reading about this BBC thing, about the situation with the women and men's pay:

This was the chart at the time: 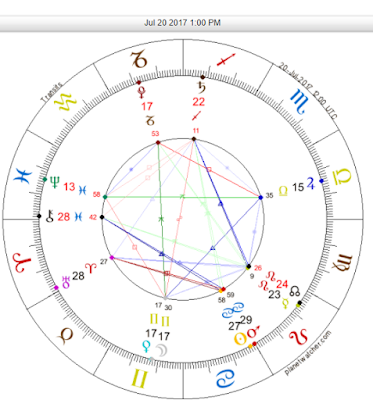 Quite amazing. Venus 17 Gemini, that's the feminine instinct in the sign that is very communicative. With two other connections there... Inconjunct Pluto and Jupiter in Libra (There's May!) Then represented separately is the male free market instinct,  Mars, Sun, Uranus and Chiron. Separately from either of these is Saturn and North Node/ Mercury... I.e. EVERYONE is getting screwed over in this working culture (in my opinion that's what that means!) Neptune is sitting there all on its own!

I do not know and passionately do not care about this issue. Mainly because I want the BBC to crash and burn. (Although, if it helps in the whole North Korea propaganda I might like it a bit more! We're the bad guys now!) I have seen it said that the male stars pull people in... People like Gary Linekar; so he should be paid £2 million.

To me Gary Linekar is a waste of good oxygen I can't bring myself to respect that argument. Although Jeremy Paxman did definitely pulled in the dough. People would not have watched Newsnight without him. The public really desire to see politicians taken down a couple of pegs!

I wonder if this perspective will be brought up with other companies subjected to these rules... I.e. a female journalist who has taken several years off maternity leave so does not have the contacts to cover big stories? The potential result of all this is that the men leave places like this and go do other jobs when their wages are reduced. Or the corporations struggle financially if the females pay is increased!

Here is a rumour. But in a fast moving situation like this, it may not be correct:

This could, by the drip, drip nibbling of ducks... Destroy the BBC!

Words of a distant land:

One of the concrete dreams I have had about the demise of the cabal specifically mentioned the BBC... Good times this is indeed!
Posted by No name here. at 14:20