Odds and ends (astrology). More on the eclipse.

Yesterday was quite a feat of intellectual effort running down the eclipse.

Today is not likely to be so impressive. It is going to be more of an "odds and ends" blog.

It is the birthday of a young woman that effected my life a great deal today, me being into astrology I consider birthdays somewhat sacred :). On top of that energy I also woke up this morning with some other ideas related perhaps to putting out some metaphysical content out to the new age community.

Back to this eclipse, and a small thing that I will include is my own birth chart, because in trying to see what might happen in this eclipse, seeing how it effects individuals is a way we might discover more information and I obviously know my own chart more than anyone elses. 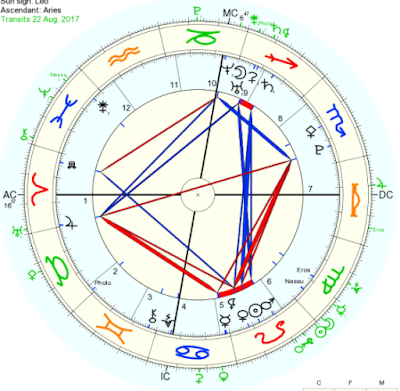 The Sun is down at the end of Leo. In my sixth house.

Yes I posted my chart with asteroids. I know my chart well enough to look at it that way but usually when looking at a composite or synastry, or a new individual chart, I will not use asteroids, until I am comfortable with the main chart.

So let's walk through this.

Data from my own personal chart:


The eclipse will be on a Friday. the planets and asteroids it aspects are:

I'm not yet sure on orbs that is the kind of thing an experienced astrologer makes their mind up on. However, at the moment I am going with a 6 degree orb until experiences makes me think otherwise which makes Vesta and Nessus not relevant.

Eclipse effect on the other transiting planets


Then, here it is effecting the other transits:

These are all incredibly political points. Uranus is the main Trumpian/ Free market politics including wikileaks and advanced technology. The North Node is about our future as a collective. On the personal level it often is what we think the solution is to improving our future. The inconjunct of Chiron exempts things to do with Russia and the mainstream media from this transit. The semi sextile to Venus means that female issues and ones to do with self acceptance and relating are also NOT going to be represented in this transit.

This solar eclipse is a fighting sun.

Links to my personal astrology:


With the semi sextile to Mercury/ Lilith, it is unlikely I will be writing about this when it happens. Or that the feeling of 'revenge/ anger' (i.e. Lilith) that is sometimes expressed on this forum towards the left, will have anything to do with this sextile. Or more accurately. I will not be saying... 'here's a solar eclipse you aggressive freaks', but with the result of whatever happened may say... like I normally do: 'here's how the technical truth and changes in the environment may effect the left'.

See that is the problem with astrology sometimes it says things that are so mundane and obvious they need not be commented on.

All together, it seems to me that if this Solar Eclipse is positive it will effect me in the following ways, in order of tightness of orb:

A) It will provide me some clarity on work issues.
B) The sense of happiness and enthusiasm I get in my life, that sometimes makes me present myself better, will be much increased. By transit this is currently linked to populist right politics.
C) This tendency to write and my tendency to seem 'wounded' to the readers will be effected, this eclipse will help the healing ideally.
D) My tendency to think and write about political things all the time, this blogs material, will be positively effected.
E) It will NOT effect my idea of what I see as my best future.
F) It may effect the hidden emotions and thoughts I have about soulmates, that further effects past lives.

In essence then, the thing that is standing in the way of healing from my 'wounds' and the thing that is likely to help my inner 'enthusiasm' are political and societal change resulting from these disclosure scenarios. However, this eclipse has the feel of a very basic expression of these, there is nothing deeper for me, nothing that influences my Sun, Venus, Neptune or Pluto or transiting Chiron or Neptune. (The closing Lunar Eclipse though effects my Sun and transiting Neptune; in fact when I said in the last post there was no evidence of a time when there could be extra terrestrial involvement, there is, in fact, in the lunar eclipse.)

To me this feels like a positive force of some power influencing things but the fight being far from over. Perhaps as a society a crack comes and things start improving and people start working on a new political or justice system of some sort... It is almost like the work before the disclosure takes a step up.


Thinking about the people that believe in David Wilcock... Probably around 300,000 properly believe him and a further 500,000 or so more casually (number one on youtube remember!) Corey Goode the numbers are probably halved or less

The amount of people that believe in astrology dwarfs David Wilcocks added to many other new age commentators readership quite easily. The amount of belief going into this Solar eclipse... The first one over America for a hundred years! [link] is going to be amazing.

Just an idea, the Peace Accords:


I have been trying to write a story in my head of a predicted future but since I have not even the slightest idea of what the future is going to be like in real terms, I have simply decided to fictionalise it.

I have partly not written it because I don't think anyone would read it. Also, there are strange things that come up when trying to fictionalise such things. It was meant partly to fictionalise a point in the future where people were happy and I would want to put me and friends/ family happy in the story, but there are other things that might get in the way of this... The person I imagine myself with in the future I do not know at the moment. Shall I guess this persons emotions and manner? It is clear my very attractive younger sister is going to radiate sexuality as she grows older... and I cannot not include such things and maintain any honesty... But writing about that is just a bit weird.

Regardless, one of the ideas I have been playing with is me and a friend in an area where armed conflict is breaking out but us both having abilities that would protect us... In my future I imagine us all developing some sort of ability, even if it is not directly psychic.

However. This is what I was coming to... One of the ideas I came up with today was something called the 'Peace Accords' that positive extra terrestrials have pushed on us in this idea. People sign up to it and are rewarded for doing things in line with them... There are certain rules that you follow which are targeted to keeping things running smoothly in the world and people are rewarded for following them properly with status. However, not following them or even signing up to them does not incur a punishment.

These would be, in this fictionalised view, a set of rules developed by extra terrestrials for when a planet becomes so conflict ridden there could just be an outbreak of violence at any moment, but the accords include everyone on the earth.

Probably silly because it is likely pyramids or other technology would reduce conflict. However, it is this kind of idea that I compare to the eclipse. A set of rules to reduce problems on earth being agreed somewhere, somehow.
Posted by No name here. at 08:30