A little nervous about this post. I have seen a small increase in my readership lately, however, that seems to have gone back down! It is VERY unlikely that the woman I am going to mention here will ever read this, however, it is not impossible. The girl in question also doesn't have as large a twitter following as one might think, and is a little insecure and unpredictable. So even though it is unlikely she will click on my profile when I like a post of hers... It is not IMPOSSIBLE!


Introducing you to someone you already know Courtney Stodden. She is referenced on astro.com in the '15 minutes of fame' category and has pushed her way through partly with reality shows: 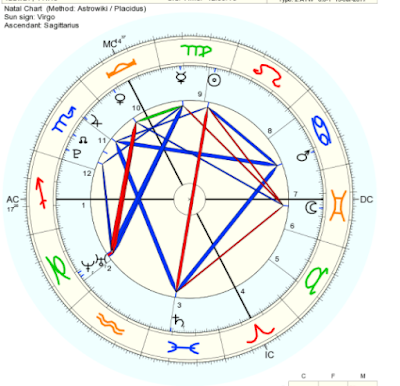 I don't know about you but I feel a little uneasy from this chart. I think it's the eighth house Virgo with those connections just makes me feel like I might fancy the girl and then be 'judged' on that sexuality (but that is of course just an impression).

Anyway, so here she is: 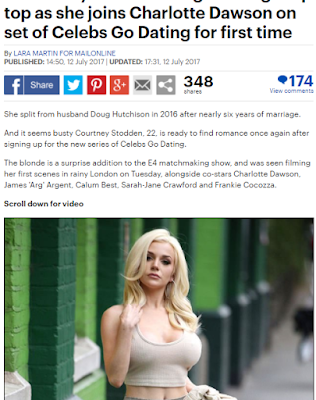 There was a time when I was young where I would idealise a girl and think she was sweet etc. Now I have a bit of a defense mechanism. I say to myself that she is 'genetically healthy' which grounds down what the situation really is!

I referenced the whole article to avoid copyright claims of just yanking the photo out, like I normally do! (Although that would be fine under 'fair use')

The point is, that in comparison to Kylie Jenners photos with Mars on the MC here [link], we can see that Courtney is taking photos that seem far more Venusian, and she has Venus in the tenth house.

Her whole 'business personality' is extremely Venusian, she hopes to capture a certain Marilyn Monroe effect!

What I wanted to emphasize here is loyalty to progressive causes:

Perhaps this is due to low education:

These are a few other times where mens biological tendency not to dislike girls might get in their own way:


And this is the point here:

The four headed horseman of the apocalypse, the four negative things intent on destroying our society is thus:

C) Racial supremacists: I.e. if Muslims or blacks commit a crime it was because of bad upbringing and they should be released, or not even recognised ("racist.") If white people say something on facebook they should be, and are, jailed.

Out of these, feminists are the least easy for people to get to grips with in my opinion. Although the antifa are out for C, on the domestic level no one in their right mind thinks English girls should be slave trafficked to keep Muslim rape gangs happy, like Antifa do. However, the power of women (the vagina) over the minds of men is quite complete.

The point on Megyn Kelly was according to the video, she is often relying on her feelings about events not actual memories and is NOT AWARE SHE IS LYING! Although she clearly has bias. This increases the danger, this whole dark unconscious process of societal destruction being aided by people that genuinely don't know they are doing something wrong!

Even when I know that young girl is a crisis actor I cannot bring myself to dislike her and my inner tendency to want to look after girls was present. In essence if I were to meet Ms Stodden I would have little power in the environment that globalists/ feminists have created. The creeping government squid that destroys business and taxes everyone to the hilt has done its work well. The poison of feminists on the domestic level in the court and education system has broken many men.

If a normally attractive woman can bend the mind of a man to first stop talking about right wing ideas, and then little by little consider her perspective on a very shallow interpretation of "fairness"; then Ms Stodden, assuming she can lay aside her insecurity, will be able to do the same to a higher degree to a more powerful man, and there are many, many very attractive left wing women that can do this.

These are some dark thoughts but there is hope. This female preference that adds to a monster that exists on a more abstract level can be opposed, and that is in the material manifestation that both sides are forced to take in the political arena. Nothing a man can say to a woman/ feminist will get to her because A) As seen by the false assault claim on Donald Trump the media and establishment will back up the woman, she has the power of the state at her finger tips, as feminists desire; B) Related but not exactly the same, on the psychological level a girl will defend herself against criticism by claiming the status of 'victim' and saying the man is a "misogynist'!

However, a political loss will impact these girls in a real way so, that is the way that the world itself will strike back at this passive aggression that cannot be directly opposed in a lot of cases!
Posted by No name here. at 23:40