So Geert got nowhere!

Rather like the Economist magazine that has cartoons communicating Rothschild visions for the future or Charlie Hebdow that communicates various things from that same group in the form of cartoons, Reuters put forward interesting imagery on the day of election and I wonder if it has been rigged*: 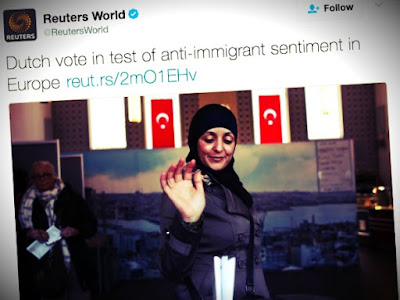 Breitbart London: Reuters Illustrates Dutch Elections with Turkish Flags and Hijab-Clad Woman
If it was rigged it will take a frustratingly long time before news came out about that. I wrote that the election was rigged in May 2015 and it took months before the Tory Expenses Scandal came out, and I'm sure rigging went beyond Tory expenses. (I think polls were probably correct here!)

Where the 'Alliance' is in all this I don't know. They managed to stop rigging of Brexit or Trump but perhaps they:

A) Don't consider themselves to be responsible for Holland.
B) Want to keep the true freedom thinkers down so they can keep the narrative to 'partial disclosure' rather than full disclosure --- I vote this one.

Regardless of whether or not 'B' is true, considering hypothetically that it was, it shows the kind of behaviour that is needed to maintain the partial disclosure narrative. The kind of unethical things.

In Battlestar Galactica, a very insider based program, had a program where the military, those below the level that deals with politics, were rigging the election to oust a very shift guy named Guyas Baltar. Because they did not do that his irresponsible behaviour lead to a nuclear explosion going off within the space faring society. The elites world view, if we do not save people 'from themselves' it will all go crazy!

I had an amazing dream this morning that really felt as though something fully outside me was giving me advice, it has lead to me considering ideas that simply were not available before.

However, even though I have stated that, I don't think the ideas got from the dream are fully informed.

It concerned (once I have added to it) an even deeper exploration of how women might like to control mens behaviour for their own ends. But on the domestic level and not on the larger political level. 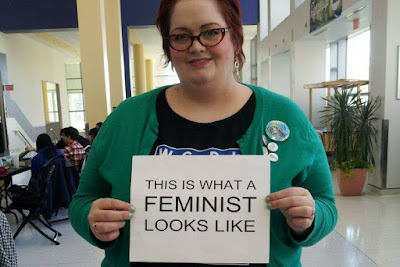 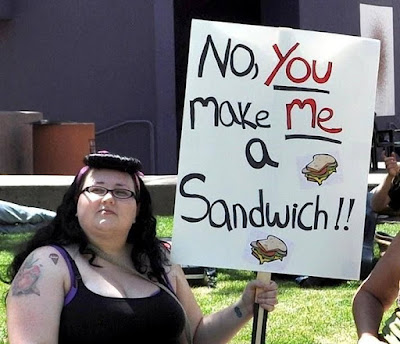 It seems to me that the feminists first consequence is thus:

Even though money is a good example... 'Tax'. The example in the dream was more of another variety. It may just be that the 'nice' man is more capable of looking after children and the other one she went with is not. That may extend to not even being her child. But she desires to create a culture for some reason. I still have to arrive at some conclusions here (and I only have so much time). The specific woman in this has behaved a certain way in the real world and I need to consider what it means symbolically.

I also intuitively know that some other women are not at all like this, don't have a hint of this behaviour. I was thinking this while watching Lauren Southern today.

To put meat on this idea will need time. But clearly, any philosophy possibly of the MGTOW variety would need to focus on financial and political power but also power to resist traps on the INDIVIDUAL level. A level that does not reference politics as its first port of call.

I would also like to note the most important thing about this whole equation in that example. The woman's crime here is completely undetectable. No one may know unless she tells them she had another opportunity, from the outside it looks like she met a guy who anyone reasonable would think was a good guy and then he inexplicably, in a way that no one could predict, turned out to be an asshole.

Now that bolded statement has a huge sense of familiarity don't you agree! To oppose this would need plans that are perhaps similarly undetectable. As the term 'Men Going Their Own Way' implies, men's power is in withdrawal.

I saw this video I think is interesting, Dave also mentions that without men clubs would close down. Men are their most important customers. Women reel the business in but men spend the money. They buy drinks for themselves and women and don't have 'free drinks for men' nights:

(I recall on Gab how viciously a guy whose name was boycott American women with a picture of a fat woman got trolled. Even though right wing women can't be naturally considered in the category of 'whores of the damned' I have noticed again and again how right wing women abandon all thought of right wing policies when it comes to schooling. At least three examples I can think of offhand and only one where I've seen the woman talk about private schooling. They want the government to take care of it all. There is something biologically there regardless of sensible political beliefs!)

* I have to rush off to work now so cannot find the links to back these two statements up.
Posted by No name here. at 00:55