Ready to change but they don't really want to.

There are a couple of things on the stove regarding something that will actually change something. EU negotiations, The mainstream media collapse and possible arrest of the Democrats in America, and this Nazca Extra Terrestrial from Gaia.

Of course, it seems to me in these matters that there is a lot of excited talking and apparent movement, then when it comes time for something to change in a way that actually effects anything, then someone in the background making the decisions stops it. It just doesn't happen.

EU negotiations are not really going that well:

That second one, the one that effectively screws the British working class at the chance of a future, is not being mentioned by anyone. It is not on anyone on twitter, Nigel Farage has not mentioned it. There is no outcry at all! Just it seems a bored resignation to Mays insanity!

We are waiting for investigations and arrests in America but the advice here is to 'not hold your breath'.

From Gaia there is no additional news on this extra terrestrial. They've gone quiet... A week today since last episode! Because it actually involves offering something that will change something!


Astrology and reasons to be positive:

This moon cycle is going to peak at a very interesting full moon: 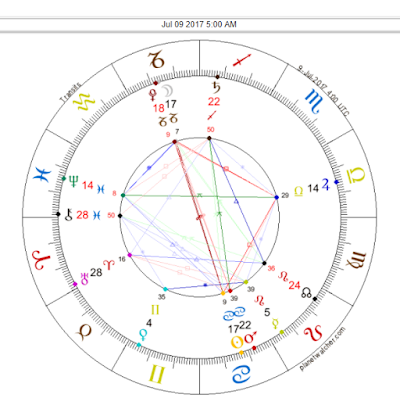 The sun is trailing behind so this general the country (Cancer) opposing the Pluto will continue and we'll likely bring our A game to the fight soon shown by when the Sun starts opposing Pluto.

This full moon is when the sun really opposes Pluto. It is also a full moon so there will be a lot of high emotion. Also, the Sun is conjunct Mars.

Elsa writes that potential violence on a personal level is something to watch out for:

If you are out and about under this full moon, most definitely be careful (Capricorn) and act (Mars) on your instincts (Pluto) to protect life (Sun).

However, with any luck something on the GLOBAL level may possibly change with the deep state. We can hope anyway!

Here is what Steve Piezcenik has to say. In the perspective of Steve and Benjamin Fulford a lot of stuff is happening it is simply not at all in the mainstream. I.e. Alliance preventing wars starting: