So, I have been doing a bit of politics in the real world. It feels very good. I have been canvassing on behalf of the Tory candidate in my area.

I got a leaflet from the Labour candidate the other day, enough said: 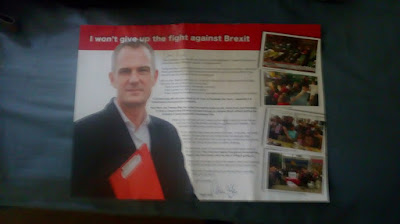 Him and my candidate are completely the same on the surface, both fairly mainstream who support business in theory, live local and talk about the NHS/ education etc. Do not talk about immigration. Do not talk about the larger politics or issues a great deal except in passing. However, a little below the surface they have a fundamental difference that may be relevant to the area. While he is an avid LGBT person and supporter. I've heard that my local candidate is very Christian and may have at some point said something about the "gay cure".

This makes the whole thing feel like a kind of celestial battle. Because the left are fairly anti Christian most of the time.

During todays twitter rampage between populists and liberals. I have been banned for twelve hours: 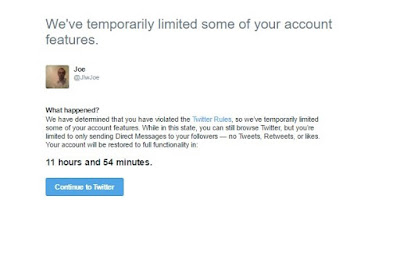 So, this was the thing that set me off, after all this the liberals are still going on about prayer and thoughts etc. I.e. I'm not going to give my time, energy or attention to the problem I'm just going to self centeredly moral highground at people that do want to solve it. Here was Caroline Lucas' tweet then mine: 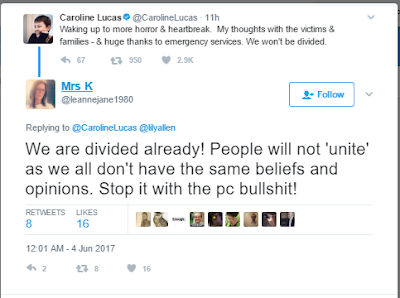 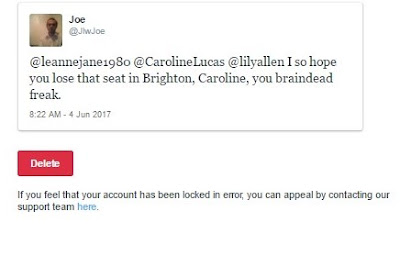 The reason this was a controversial tweet is not because it said anything that was that bad, it's because Caroline wants to retain her seat in Brighton Pavilion. So she saw that and did not like it and complained to twitter, most likely.

Why though did twitter ask for my mobile? A more paranoid idea of mine is that it wanted to provide someone with my mobile number so they could track my whereabouts, perhaps this is a service twitter provides to keep celebrity snowflakes on its platform. I cannot think of a logical reason that twitter would want my phone number because surely an email is a good enough way to screen out bots. I think I will be changing my number just to be sure.

It also makes me wonder about twitter as a platform. I left Gab because there was not enough interaction, perhaps that will have changed or perhaps I could put up with that. I tried Minds earlier today (I realised I did not give minds enough of a chance) and I have wondered about looking more closely at Medium which is kind of a bloggers social network.

If mass censorship arrives as it is in the Tory manifesto, it is likely that twitter and facebook will be censored and the crushing hand of Saturnian tyranny will not fall down as far as Gab, Steemit and Minds... Of course that is unless those platforms are simply banned altogether.

and then I made this one:

So, these charts are eerily similar as though they were forecasting the same events:

Someone in an astrology forum I was discussing this with said something along the lines of "it looks like the terrorists know their astrology".

Steve Pieczenik claimed that the Manchester bombing was a false flag to go to war with Syria. Mars in massive aspect plus so much happening in Aries seemed to confirm that. In this chart however, Mars is not so well aspected and not so much is going on in Aries.

To me, I think the reason for all these attacks is not about the UK election. I think it is about distracting people from what is going on in America because the Americans are close to a massive breakthrough, and a breakthrough in relation to the Democrat/ Hillary side, a kind of "dark feminine":

So basically, the Wall Street Journal has written an article entitled: Hillary lacks conscience. CNN with an article: Hillary should take her fair share of election blame and MSNBC: Russiagate is a Conspiracy theory created by Hillary Clinton.

Jordan asserts the reason they are suddenly throwing Hillary under the bus is because the Seth Rich story is just about to break and they want to separate themselves from it.

(I am not saying I flatly agree with this video, I simply think it has good points and is presented well):

Last little point... I also had this conversation with a Muslim about Islam... Whenever someone says this: 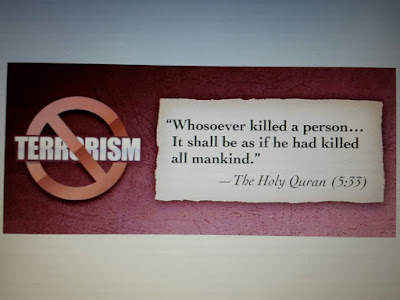 Yes, the one line Muslims bring out to supposedly prove that Islam disapproves of killing, well, here's the rest of it, and you can define mischief however you want:

... and here is another random conversation on this: 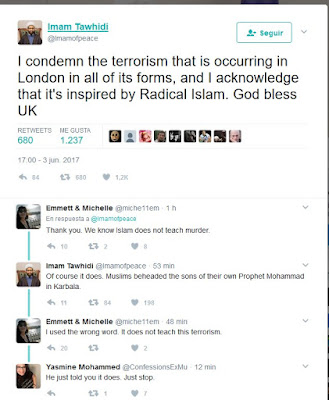 It's good to have some Imam's speaking sense after all!

And just one more thing, from another truth speaking Muslim: