This is the jupiter retrograde, it is important because it will go direct on June 9th, the day after the UK general election (from cafe astrology [link]): 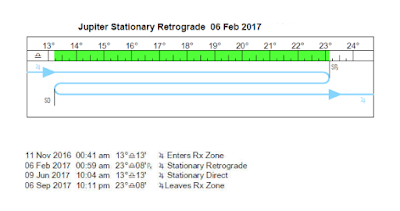 The way retrogrades work is that a planet is going forward with a problem, so there is something that is not correct in the way the energy is being experienced... On the retrograde the problem is experienced more fully without the positive side of the movement forward so the person/ people can focus on it and then when it goes direct again the problem is no longer present.

So, I pulled some articles from the sixth of February (I have not read most of these):


Nigel Farage has said the Stoke-on-Trent by-election will mark an anti-establishment “triple” after the Brexit vote and the election of Donald Trump.

Daily Mail: Women's March organizers now want women to walk out of the workplace for a day as part of a giant 'General Strike'

We can see right off the bat, the Anti Trump protesting stuff has taken a big hit with the Kathy Griffith Da'esh video. The Nato area has come up recently and seems to be finished with the other global leaders apart from America and the UK not paying their way, and the "travel ban" has also come up as an issue recently with Trump tweeting about it in relation to the most recent terrorist attack in the UK.

The other two... UKIP and Feminism. We don't know with feminism yet, that is an important globalist project. However, I realised when thinking about this something that has basically gone below the radar in the commentary on this election so far. What if UKIP actually get a few seats? Since Craig McKinley is possibly going to go to jail for his part in election overspending other Tory candidates will be far more afraid of overspending (couldn't stop corruption out of Labour though, no more than you can take a fish out of water).

Also, as I said earlier, we had the bolt of lightning in Kent! A sign!

Just an idea of course, the polls do not have them winning a single seat I don't think.

Also, part of the agenda for the terrorist false flags (I think is likely) are revealed here: 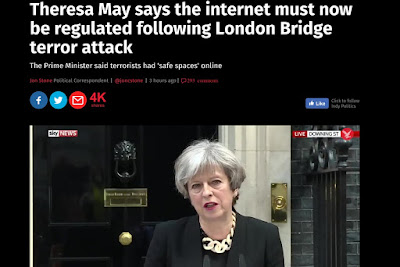 Well then, we can say with confidence that Theresa May is a globalist then. To me personally though I think her party is anti globalist in places and that's why the Conservatives are still pushing through Brexit.
This is hardly a surprising development.

I have no conclusion about the election results. I don't think censoring the internet will go down well with people though. Globalists seem to be of the deep conviction that people are too stupid to tie up their shoe laces.
Posted by No name here. at 23:35