So the past two or three days has seen a bit of a downward spiral.

After watching this video and realising how hard it is to sometimes look into these darker areas, I realised that I had been neglecting my study of the Qur'an. Studying these dark things (such as paedophilia) is extremely unpleasant as shown by honey bee almost crying in that video; however, I realised that just because something doesn't feel good it does not mean it's bad. The 'not feel good' aspect is often, as I see it, a physical manifestation of the resistance that the world puts to this information so the more friction there is in studying something like this the more likely it is going to have a big impact. 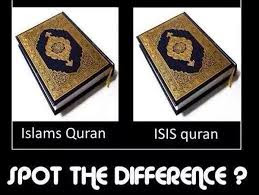 When dealing with the liberals or the left, I figure that having deep information is very powerful. If someone knows their area they can say a few well chosen words can make their point, and others know they know what they are talking about. If someone doesn't know their area they are either honest about that or they attempt to use additional emotional intensity to press their point... I.e. liberals.

Star Trek Deep Space Nine has a negative religion towards the end and black magick. It is fascinating and mythical and to motivate myself to read the Qur'an I think of that fictional idea. Processing ideas through fiction when the reality is just too dark to contemplate is something I believe is a useful and necessary tool., and is I think very common of how the positive polarity deals with such things

This song has been going round and round in my head recently, it just started up out of nowhere. It was part of what lead me to think of this area again:

Firstly things might not be as hopeless as they look...

Alex Jones has been talking recently, with informed guests, of how common the paedophilia is and how many, many peadophile trafficking busts are happening all over America. He say that it is unbelievable common (like 7/11's) but the recent busts plus a few more come to about 5000 people, out of a population of 300,000,000 that doesn't seem to be a great deal.

Regardless, things might be happening beneath the scenes that will lead the way to a sudden change.

Also politics wise it is likely the EU and the UK are waiting for the French election. The bad guys always have this extremely bizarre, almost delusional idea that they are going to somehow win against the odds at the last minute. The UK knows if Le Pen gets in it changes everything. Surely the Alliance knows this too.

Another election that is important in English politics is the Unite leadership election (ballot closes April 28th. Not sure when election is)... With this you have two competing groups. The Corbynistas that are aggressive people that support socialism, and are very close to anti- Fa... and the liberals that are blank slates, rather like the body snatchers in the famous film of the same name, controlled by a VERY sinister group. Both groups are completely incompetant.

Communist or paedophiles?
Posted by No name here. at 13:31