Dystopian fiction to these days.

Another struggle at work... But what can you expect from these minimum wage jobs!

I'm now reading 'Brave New World'. Recently I read 1984 and before that I read the Hunger games. While that is an extremely short list of fictional dystopian novels, most Netflix shows I am watching have a dystopian angle to them, with time travel for instance, so I feel I have ended up thinking of the concepts quite a bit.

Continuum's mythology was that in the future, the corporations had taken over everything, that the corporations had had to bail out the government and there was no longer any free speech. There was a lot of unpleasantness in this fictional idea including incredibly harsh penalties for people not paying/ not being able to pay, their debts. 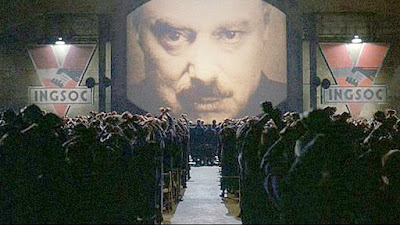 1984 is about an extremely totalitarian government. This is a very male sort of aggression. War, rape, physical assault and stealing are all things that are done too a person. An assault on them. You are miserable and hate the establishment, brainwashed forcibly by big brother.

1984 in my view though is an accurate description of some of the dystopia we are seeing, but most of what we are seeing is more subtle than that... Perhaps that's the end goal. However, another dystopian lens is Brave New World. 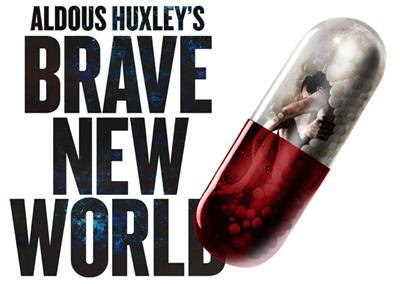 In Brave New World the focus on brainwashing is far more extensively worked out. People repeat the phrases and are drugged with a marijuana like drug in order that they don't rebel in terms of thought. The population are actively brainwashed through a more feminine process, an expectation of following the social order, against the kind of independent thought that might lead to rebellion:


Pretty harmless perhaps but also pretty disquieting. That mania to start with for doing things in private. Which meant, in practice, not doing anything. For what was there that one could do in private (Apart, of course, from going to bed, but one couldn't do that all the time). Yes, what was there? Precious little.   --- P76 Vintage Huxley Penguin 2014


'I don't understand anything' she said with decision, determined to preserve her incomprehension intact. 'Nothing. Least of all,' she continued in another tone, 'why you don't take soma when you have these dreadful ideas of yours, you'd forget all about them. And instead of feeling miserable you'd feel jolly. So jolly,' she repeated and smiled, for all the puzzled anxiety in her eyes, with what was meant to be an inviting and voluptuous cajolery.

He looked at her in silence, his face unresponsive and very grave - looked at her intently. After a few seconds Lenina's eyes flinched away; she uttered a nervous little laugh, tried to think of something to say and couldn't. The silence prolonged itself.  --- P79

And this from the introduction of the Vintage edition by Margaret Atwood:


The girl shedding her zippicamiknicks is Lenina Crowne, a blue eyed beauty both strangely innocent and alluringly voluptuous - or pneumatic', as her many male admirers call her. Lenina doesn't see why she shouldn't have sex with anyone she likes whenever the occasion offers, as to do so is merely polite behaviour and not to do so is selfish. The man she's trying to seduce by shedding her undergarment is John 'the savage', who's been raised far outside the 'civilized' pale on a diet of Shakespeare's chastity/ whore speeches, and Zuni cults, and self flagellation, and who believes in religion and romance, and in-suffering to be worthy of one's beloved, and who idolizes Lenina until she doffs her zippicamiknicks in such a casual and shamless fashion.

Never were two sets of desiring genitalia so throughtly at odds. And thereby hangs Huxley's tale.

Well I don't know about that!

During casual reading and many secondhand stories I have heard all sorts of incredibly sordid tales. The ones read in magazines I think are too over- the- top to include her, and the descriptions of debauched parties are not much good either. The level of abortion was very high at my university.

But I do believe this vacant sexual promiscuousness and experimentation is a large part of the liberal brainwashing today. Huxley has captured it very well.

Relation to the real world:

This attitude, this feminine darkness that women are able to behave as debauched as they like, no responsibility in love, and no consequences. If they get in a problem with the man, the childs father it is always his fault and it is never, never, NEVER something to do with their own behaviour or a signal that they should have taken more care in choosing a partner. There are a few manifestation so this: 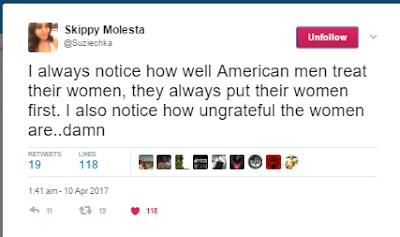 Comments on that video are interesting.

And, linked from another of my blog entries on feminism:

I have some to say on karma at the moment but not on this entry. To me, karma is collective, and it is not the only significant metaphysical force that has to be considered when talking about such things. There is also polarity, awareness, and karmas relation to cause and effects.

However, it seems to me that karma is very intelligent, perfect almost, and that when it comes down to it that women like this: 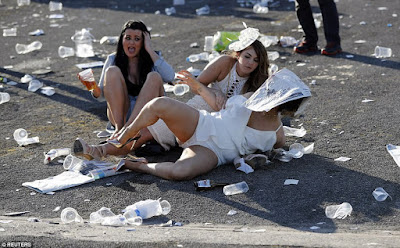 A new reality will suddenly reveal itself. One that has strength and cannot be ignored.

The reason this is important is that it seems to me there is a very relevant feminist aspect to the current situation.

Going back to what I was saying before, male negativity is that which is done to someone, usually some sort of violation. Female negativity is the sin of omission, the avoidance of responsibility, a parasitical negativity that feels like it sucks the energy out of others (perhaps via taxation) and moral highgrounding. The feminine negativity doesn't just want to do negative things it wants you to smile and say you enjoy it being done, or at least to say that it is being done to you for your own good.

Examples of this might be the Rotherham case, the sin of omission, and teachers unions allied with Antifa that influenced teachers to ignore this form of sex trafficking. False rape accusations. Rather than innocent until proven guilty it is guilty without proof with no option for proof of innocence (perhaps because the woman making the accusation "feels" you are guilty). Taking the moral highground in claiming everyone is racist in not approving of immigration no matter how badly it is effecting them.

This form of antifa grassroots negativity (rather than elite) is shown in political movements like this. That are active in society at the moment:

Of course, as I have written about previously we are in a bit of a negative state at the moment but I fully expect that to turn around. When there is a positive movement what starts is lots of elation at a vote, or positive movement leading to the full moon, then the remainers, and the whiny loser negatives start to slowly monopolise the narrative again, usually in the wind down from the full moon.


Here though we have seen another pattern. The negative has taken this news cycle and after these events happened (Trump assaulting Syria) the positive had to come up with their defense running up to the full moon. A few words by Steven Pieczenik are one example of this.

What will likely happen now is a wind down, commentary but no movement until a few days after the 25th (with the possible addition of something for the next two days, moon conjunct Uranus). Then the next cycle which will likely see Le Pen elected will start to take shape. The preparation of physical and metaphysical entities for the coming event if it is as big as I expect it to be should be obvious.

So, Aldous Huxley. The brainwashing to modern neo- liberal values check. People being drugged onto anti depressants... Check. It is likely that each of these books and films shows a side of these dystopian ideas but nothing, absolutely nothing comes anywhere close to the reality we are currently living in.

The evil of today is so evil. I remember contemplating negative characters in some show or other and then going back to alternative media. Compared with the clean killing of innocents, even thousands. The weirdness of mass paedophilia is not touched on in any fiction that I can think of... There is a good reason for that, people read fiction to enjoy it not to contemplate paedophilia!

The amount of people in power that are involved in this strange satanic activity. The utter unforgiving dark nature of many in government and the establishment as a whole. The fact that their activities have lead to mass rape of innocent Europeans. This staggers the contemplative capabilities in its evil and dystopian fiction is below the level of a childrens book in comparison.

- The Hunger Games had an interesting take on the anger of those in power, to punish, and the way they separated the 'Brave New World' class from the '1984' class with references to poverty and human propensity to violence. But it did not take into account that usually the evil people are the brainwashed among everyone. People were all on the same side in this book.
- Brave New World talks about brainwashing. But gone are the propensity to war of such insanely evil people in the elite of such a society.
- 1984 talked about totalitarianism. But lacked any negative use of human passion and violence.

Real life of course marries all these ideas, and a lot more, including the massive amount of good in the world.