I applied again at my old workplace yesterday (I got a phone call recently from them). The same franchise but a different store. (so not one of those that exclusively hires foreigners).

I slept better than I have in months. There's just something wrong with the place I'm working at at the moment. Everything there is done indirectly so that instinctual feeling I get I cannot bring up hard evidence to justify, however, I have recently been scapegoated for a complaint a company made about me and when listening back to the call... there is absolutely nothing wrong with it.

Now someone might be able to make a case against me in relation to other calls (which they had offered no feedback about previously) but they cannot make the case that the call I did get a complaint for was in any way bad at all. Despite the fact they "kind of" tried to have me fired for it.

Luckily, the woman that writes the contracts wrote in a fairly long notice period even before the introductory period is finished. Probably to stop precisely that kind of thing happening.

So Happy Easter everyone. I stay away from too many deep thoughts about the deeper meaning of the Creator etc. since I seem to have observed a certain lack of justice in my personal life and with it a feeling of being 'abandoned by the creator'. If I have a life path surely if other people on my life path decide to go against it then they should be disciplined (in the larger karmic sense) or brought into conformity with it. But this does not seem to have happened, so even though I claim the protection of Christ in this dark period we are in, and I need it in order to remain sane, my faith in some ways is a little shaken.

This is one of the things I wanted to talk about today:

This is a video at a recent rally with Free Speech supporters and Anti Fa. A girl, who we are damn lucky advertised that she was going to get violent with "Neo Nazi's" on her facebook, get punched squarely in the face.

First I looked at this video and thought it was the guy who hit first.
Then someone pointed out that she had grabbed the guys neck before he hit her.
Then I realised that she did grab his neck but it was in the context of him already having forward momentum.
Now I realise she has an armouted right glove!: 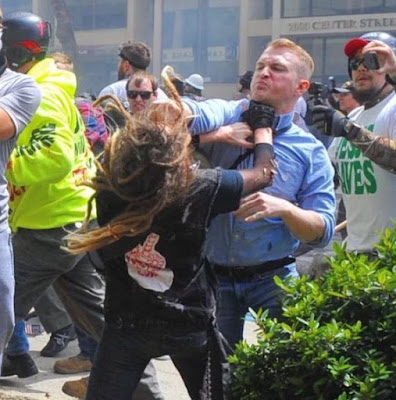 I have talked about self defense in recent articles. I don't know the context of this battle and it is likely there were many aggressive women on the anti fa side plus, with masks on it can't always be obvious what gender people are. (Note the photogenicness of the guy at the back's coat clearly saying 'Jesus will judge you' as the punch lands!)

With most martial arts it is primarily defensive. It would have been more satisfying if the anti fa woman had been able to get in a real attack before she would be taken down. Of course in this case most self defense is more brutal than a sucker punch to the face. For instance, if someone moves forward and punches (Self defense designed for drunken bar fight sometimes) and you are directly in front of them if you move their punch lightly to the side you have closed the distance between yourself and them. Which means you are close to their ribs, neck and legs.

Also, any grabbing motion as long as the other person isn't too strong invites all sorts of aikido twists. I remember one move, I don't have the complete one and have not practiced it, but it involves just a small swivel of the feet when someone grabs you and their forward momentum gifts you their arm at an angle. All you need to do is grab it properly and you can twist them into a puppet.

If I were to practice anything though it would be a very underutilised move in the martial arts world... The sweep. You can place your foot just under someone elses and take them right off their feet.

I suppose what I'm trying to say is it would be good to be strategic (although I refrain from judgement of these events). In the event of a move that would gift an arm twist that completely incapacitates the attacker, as in perhaps an attempted headlock; you could grab her and make her feel it and tell her to 'go home honey'.

According to this video:


The land under the Middle East and Northern Africa houses some very negative beings.

I have previously stated that I think Muhammed was a positive being.

The environment Muhammed lived in though was likely quite a violent one. For a long while I looked at Islams history and thought that there could be no defence against the idea that he basically lead a negatively polarised group. Until I looked at the history of the land he lived in... and what I found was... Nothing!

Which is unusual. There should be something. There are loads of scholarly type people that are basically anti Islam why is there no real records of the period before Islam? These people would have dug them up. There would be pages or videos saying... "The period before Islam... Was it really a time of darkness?"

But there is not, so this seems to say to me that the psychology of the area is atypical in comparison to how we in Europe and the Americas see it. We have long historic records and culture in that period.

This is my partway explanation of the IQ difference in the area.
Posted by No name here. at 03:44