The beginning of the moron barbecue.

(Later note: I plan to often refer people to this article as I consider it of importance however events have shown some of the things I said in this to not be true. Let me just say whoever the 'morons' are the point is it's those people who will have their beliefs challenged is the point of this article. As I write this today (20th December), UKIP lost the Oldham by election and are now engaged in a renewed inner party dispute. I have many different ideas as to how this could play out but a celestial/ spiritual event like this should include 'morons' from any party!) (updated at bottom)

This blog (based on original David Wilcock articles) has followed when events have been precognicised when lightning strikes have archetypally symbolised something.

The first one by David Wilcock was lightning hitting the Vatican when the last pope resigned.

Then we had lightning striking the top of the One World Trade Centre in America, a few days later the DOW bubble burst and equities haven't again raised to that level since. 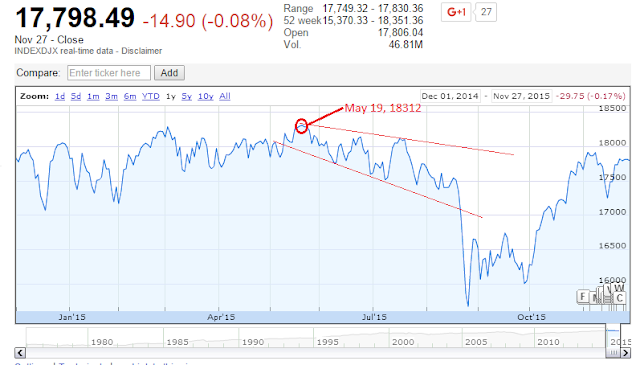 (These are not real resistance lines, just lines I put in for a rough diagrammatic purposes!)

Then, in Saudi Arabia, a lightning strike hitting a mosque having building work done on it by the Bin Laden contruction company on 9/11/15.

Interesting huh? Especially that last one with all the forces of 'the light' now plowing down on Saudi Arabia's brand of Islamic extremism.

Another one today, is this relevant? It seems like a small thing but I think it is relevant:

Daily Mail: Stars are evacuated from the I'm a Celebrity jungle as severe storms with lightning and torrential rain hit the Australian bush cutting power to the show:
http://www.dailymail.co.uk/news/article-3338207/Stars-evacuated-m-Celebrity-jungle-severe-storms-lightning-torrential-rain-hit-Australian-outback-cutting-power-show.html

(I have begun liking Daily Mail recently. I realise partly that the left wing hatred of it perhaps sometimes comes from the DM reporting facts the left simply don't like. Perhaps it is sometimes justified I do not know.)

Why is this important? It does seem a bit irrelevant doesn't it! I could be over egging it with this lightning thing but to me, it seems that the very moronic mainstream culture is next in line for this 'spiritual- culling'!

The electricity going off is interesting as well, kind of like what might happen when equities take a tumble!

The 'left wing', the far ish and young left, I used to think were a genuinely important part of any rebellion against the system, since that time and dealing with them I have found them to be continuingly condescending, arrogant and stupid:

A) Continuing to accuse UKIP of being racist and anyone who doesn't agree with their views as 'Tories', 'red Tories', 'fascists' (while refusing to define that term!)

B) Repeating ad- verbatim stupid phrases that mean nothing and that anyone in the know knows doesn't help like #refugeeswelcome. Which continue to allow stupidity and censoreship by the establishment.

C) Calling and scheming to censor anyone that doesn't agree with their opinions (a good case of this is the fifth density (IMO) Katie Hopkins, whose views I don't always agree with, but who is not any of the horrible things the left calls her).

D) The refusal to simply listen to others and the tendency to 'block' if they lose a political argument.

E) Don't even get me started on the 'transsexual/ homosexual... cisgender' part of this equation.

This problem has manifested largely in schools as well where some pretty crap behaviour runs rampant, such as 'safe spaces', making sure to de platform many thinkers and this kind of thing (remember, UNIVERSITY IS NOT AN INTELLECTUAL SPACE, IT'S NOT!!!) The stereotypical PMS on acid, maybe that's not fair though, anyway:


As a secondary note though, Australia is known to be a country that has unforgiving policies towards migrants arriving on boats... (Or do they... Is this just left wing propaganda?) So part of this 'moron barbecue' could conceivably involve racists and those that act without compassion. This is a little annoying I can't really expand on this and this one paragraph does not do this part of it justice.

I have never liked Corbyn but do not dislike him. However, I would like the political debate to move on from the childishness it seems to have taken on with him and the £3 Trots in power. Which it does look set to do potentially:

Excerpt: Rochdale MP Simon Danczuk suggested Mr Corbyn could face pressure to go as soon as Thursday if Labour fails to hold the safe seat of Oldham West in a by-election where it faces a stiff challenge from Ukip.


So, together with this airstrikes in Syria vote, in which Corbyn is very much in a real quarrel with his 'shadow cabinet', and will lose status likely no matter what he does. UKIP looks to make mega gains in an Oldham by election:

Telegraph: Nigel Farage urges Tory voters to 'lend' him their vote to defeat Labour at Oldham by election:
http://www.telegraph.co.uk/news/politics/nigel-farage/12022787/Nigel-Farage-urges-Tory-voters-to-lend-him-their-vote-to-defeat-Labour-at-Oldham-by-election.html

Nigel Farage himself is on his way there as I write this. Jeremy Corbyn is dealing with a fractious Labour party and Syria.

Nigel Farage is good at what he does as well. Although the odds for Labour (which have been hugely growing in UKIP's direction) are 1/3, and the odds of UKIP are now 9/4, up from 4/1. It is very likely that UKIP will win this one.

Even one UKIP member gaining power is a HUGE thing, and a real pain to the indulgent left. Their party is right out of a fifth density rulebook! It's all good. Out of EU, cut all global warming legislation. Very intelligent indeed!

The reason I would like this though is that if the leadership election went to someone like Liz Kendall after Jeremy left, politics could move more in an 'adult' direction. I was thrown before partly by David Icke backing him but David Icke does not produce that good information always, since he rejects the 'Alliance' part of the equation.

(Truly, a lot of these people are nice, even reasonable and not having the same knowledge I do isn't a crime. It's just there is a very concentrated group whom believes unequivocably UKIP is racist/ fascist, don't seem to have any committment to free speech, and will not listen to anything other than their own ideas on global warming, I find these people very trying and do not think they are useful to political life.)

Updated: As the moron barbecue specifics seem to be becoming clear a month or so later, I have written about it again here, context in preceding articles: Further update to moron barbecue pagadigm: http://33phoenix.blogspot.co.uk/2016/01/further-update-to-moron-barbecue.html)
Posted by No name here. at 06:58