It must be so exciting living in America at the moment.

But England also has some good news. Even though the Supreme Court did not rule in favour of the government on Article 50. They did rule in favour of Brexit in relation to Scottish, Northern Irish and Welsh potential vetoes. Although we now need a vote to start negotiating to leave the EU, it is likely that now the court case is out the way, we might see a vote go through and be completed sooner than the end of March.

We could potentially see England beginning the process of leaving the EU by next week! This would be fantastic.

My local MP, with the irritating arrogance of a remainer, is very pleased about this vote, is one of the 74 MP's that signed up to Vote Leave Watch. When Article 50 is triggered, he will lose polarity, and that is good!

It is as though we have just been waiting for the results of the court case, that there was never any other reason to hold up the triggering of article 50! 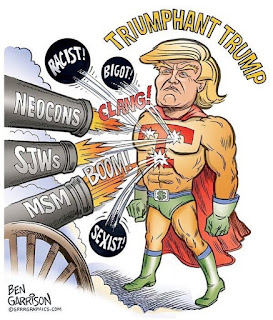 On to Trump who is signing executive orders. One of which is TPP, an Orwellian style trade deal. All over Europe millions of people have marched against TPP and nothing changed. Trump gets in signs a piece of paper and it is gone.

He signed three the other day and two more just now. At the moment he is partly getting rid of things like TPP. The deep states plans for the future. Once he has dealt with that stuff he will get down to things which improve life for everyone.

Additionally, coming down the pipe to be voted on, is a bill from a Democrat putting forward a plan to remove America from the United Nations. Also Rand Paul has put forward another bill to audit the Federal Reserve.

This is all very exciting. I am a little behind on my reading but I read in the Daily Mail today someone important saying that the BBC was very heavily involved in Saville era goings on. The BBC is one of the most important problem areas in this game.