I am almost too ill too blog.

That is a little bit of a good thing. The week off I have from work is going to start doing very little. Finally getting some much needed rest.

So I will keep it very short, and yet again I will not publish on Social media until I can write without feeling vaguely nauseous and can thus actually apply my energy to an article.

According to the BBC reporter Andrew Italy looks as though it's headed for bail in: 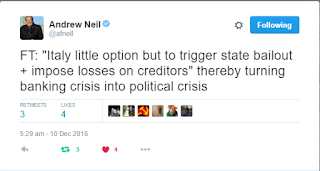 But that is very, very big news. If could all come crumbling down.

Also, I watched this from Stefan Molyneux:

Some of the examples this woman gave of feminist behaviour are shocking. For instance, one feminist went to see this Red Pill film and saw a Trump hat in the audience and had to temporarily leave the theater because she was triggered. Another woman raised a child for 18 years without telling the father then charged him for backdated 18 years of child support.

I think we have a solid explanation of the behaviour we find here.

It seems to me pretty awful how positive polarity in the real way I know it can be experienced is nowhere to be seen. It is so far away it can scarcely be imagined!

We eagerly await the next installment of the news of this global cold war!