This is all getting a little like a head f*ck.

Not only has there been a new totalitarian law passed in the UK that doesn't even have the pretence of fighting terrorism anymore. There are very convincing comparisons to Orwell, and much fiction, such as the Star Wars rebels series I am watching lays on the dystopian future fiction thick.

These are two of the three Gabs on my home page as I just opened it now: 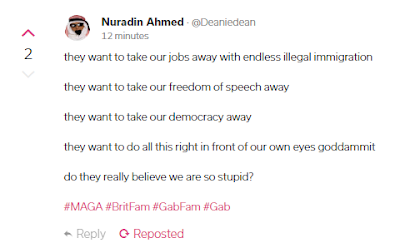 Ronin gabs this stuff all day!

However, I have seen and built on some news I find interesting.

Daily Mail: Mystery as UFO hunter posts images of huge spherical object in front of the Sun that was captured by NASA cameras 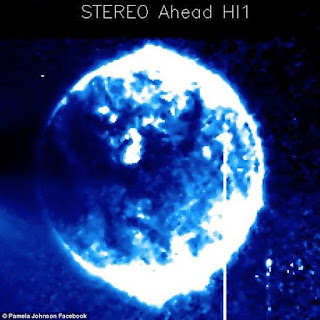 For more than a year now, one of David Wilcocks best contacts has been talking about these blue sphere beings. An extra terrestrial race that is behind many of the positive things that have been happening, and counteracts an evil extra terrestrial force exposed by David Icke.

To see this on mainstream news is a big moment.

These forces communicate in terms of synchronicity often, a term made more common by David Wilcock. The synchronicity of Trump is that his name is 'Trump'... The negative forces are 'Trumped' at the moment! There is a non globalist in the highest office in the land.

This is also linked with my posts about lightning strikes predicting social turns of events here. I had another sense of one that I did not want to talk about. Now the lightning strikes have become so narrated by yours truly I think the idea 'up there' is that any more direct lightning strikes will violate the law of free will.

My sense, just held personally a few weeks ago, was that the next social pressure will come to the LGBT group somehow. Although, I do not particularly think this group is a massive priority for 'karma', it must be stated that according to my spiritual beliefs talked about briefly in relation to this subject here homosexuality itself is a result of an energy blockage and not a process of 'self- actualisation'.

Anyway, I thought that a few weeks ago (frustrating now I did not say it at the time) and today, I've seen two examples of how this might be playing out.

Although Mike Pence never stated that electro shock converstion therapy for gay people is somehow a good idea, the fundamentals of the Christian position that family is a man and a woman will likely be a mainstay of this administration with such people in power. Also, here is another very strong indication this will be the case in the sociological tuns of the future:

Veteran Vatican analyst John Allen noted that with his new appointments, Pope Francis had engineered a “seismic shift” in the Catholic hierarchy in the United States, and by naming just progressives, “Francis was making a statement about the direction in which he wants the American church to go.”

For their part, the U.S. Bishops responded earlier this week by electing two staunch conservatives to the top posts in the Bishops’ Conference (USCCB).

In what was widely viewed as pushback against the Pope’s progressive picks, the bishops chose Cardinal Daniel DiNardo, archbishop of Galveston-Houston and a known conservative, as president of the USCCB. DiNardo was one of 13 cardinals to sign a letter to Pope Francis in October 2015 raising several objections about left-wing manipulation of the controversial synod on marriage and family life.

(Links removed and my emphasis).

The current pope is a disgusting human being, he has done nothing about the Christian deaths in the middle east, and even sent home a Syrian refugee when he found out he was Christian not Muslim. He deserves to be tortured for a very long time.

One last note is that I have witnessed what may be an 'energy blockage' that is referenced. I have noticed gay men mispercieve women. Perhaps because they idolise femininity. Lesbians idolise femininity too... We are starting to see a pattern.