I have had hits from all sides lately. I've been unable to re- engage with an old friend who broke contact because of political disagreement because of work on his birthday bash! Separately, I'm dealing with someone who cancels arrangements, then when you re- arrange... Cancels again; it's getting tiring dealing with them and it's probably time to no longer contact said person and subtly break contact (spoke too soon!). While money is not low it has to be watched carefully. I'm in a dispute with a prepping website I ordered from and while I solved on hurdle in my 'insomnia', getting to sleep; when I use herbs to do that I do not stay asleep. So, because I wake up early from slumber, day after day of just a few hours less than I need and I feel fairly gritty, everything aches for no particular reason.

LUCKILY though, I am working less hours than I normally do next week. So things can get better. I can buy the right food, eat well, hopefully sleep well and generally recover from... Just life really. Perhaps exercise is a good foundation at getting better sleep and good overall health.

Liberals are as confident and moral highgrounding as ever; nothing that has happened recently has effected the world in a physical way that would empower 'real people', and allow them strength that undermines the liberals whining (i.e. in the free market perhaps), and truths being revealed. I don't know about you but generally, after the election victory I don't expect that much from Trump.

But... I do expect something from the positive powers behind the scenes. The UK has shown it's true globalist colours and laid the way for the following up of the 'fake news' scandal, whereby, people who follow zerohedge and any other things that goes against the government in even a minor way, can be tracked and killed. I have seen nothing from the fictional 'empire' in star wars of this kind of Orwellian efficiency.

Perhaps my only hope is another event, turned up as a date that I did not even know about. I know about December 4th. November 29th we see the internal party election of UKIP's new leader. They have one particularly interesting candidate, Thomas- Rees- Evans. Two liberals are at the forefront of the running for the top job... But hopefully, hopefully this guy gets in. This would be an extreme surprise because no one is expecting this. A happy surprise, where liberals get that soft gooey bit of their emotions punched straight in the face!

I was very surprised when I checked the astrology for November 29th: 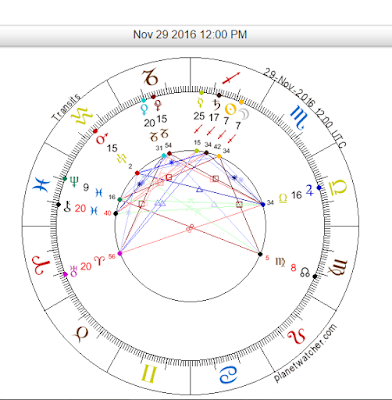 Note the Sun - moon (new moon) at 7 deg Sagittarius (top right corner). This is all becoming too much of a coincidence. Leave.EU announced their release on a full moon and although I can't remember them, I believe there are other such examples. The people pulling the strings here must have some idea of astrology.

Neptune goes direct tomorrow that will give us some kind of instinct about the next thing in the Social Justice Warrior saga. Also, extra terrestrial areas may come through... Just think how those two things could potentially collide... The millenials will jump ship the second extra terrestrials are on the agenda. Because they will want to welcome these people, and will not go along with the Hillary crews games.

For me personally the opening square here will be exactly as a new pattern is due to start up. So this is actually when the energy is going to be 'set' according to simply logic.

So to look at this then, New moon, square north node square neptune. This new energy will cause severe tension with the social justice warrior area. That is pretty much as far as I think I will go.